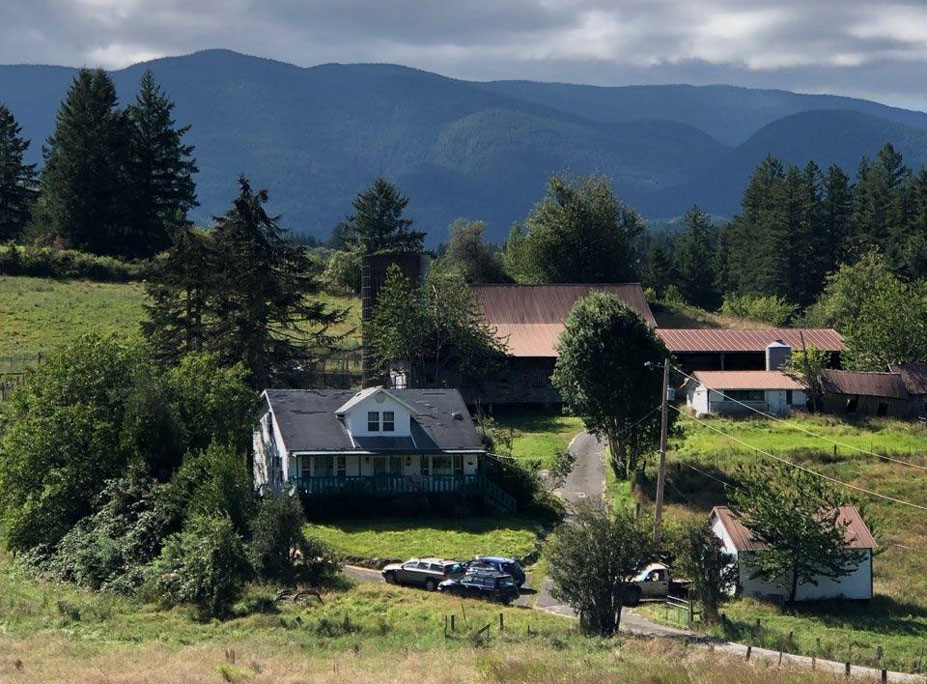 Kawamoto Farm, on Lake Leland north of Quilcene, was founded by Japanese homesteaders Kaichi and Itsuno Kawamoto 100 years ago.

Jefferson Land Trust is pleased to announce that protection is underway for Kawamoto Farm, a historic dairy north of Quilcene owned and farmed by the Japanese American Kawamoto family for the last 100 years.

Private donations and recently secured Navy REPI (Readiness and Environmental Protection Integration) funding — like that used to protect Ruby Ranch, Valley View Forest, and Chai-yahk-wh Preserve, and many other properties in Jefferson County — made it possible for the Land Trust to purchase the first of two easements on Kawamoto Farm. These protections will ensure that 149 acres of historic farmland, working forestland, and other wildlife habitat continues to be available as farmland and that the heritage of the Kawamoto family lives on in perpetuity. 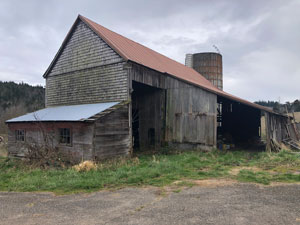 The historic barn at Kawamoto Farm.

The Kawamoto family, wishing to preserve the farm’s legacy, first began to work with the Land Trust in 2019. After visiting the farm, our conservation committee members determined that the historic farm aligned with our mission to preserve working farmlands, limit development in key environmental areas, and preserve the rural character of Jefferson County.

The farm’s founders, Kaichi and Itsuno Kawamoto, immigrated from Japan to Canada at the turn of the twentieth century and later settled in Leland, a few miles north of Quilcene. As “Issei,” first-generation Japanese immigrants, they were not allowed to become American citizens. Further, Washington state barred so-called “aliens” from owning property — a law specifically targeted at Japanese farmers.

The Kawamotos had four children, all born in Quilcene. When their eldest son, Kaichi “Joe” Kawamoto, was 12 years old, the Kawamotos arranged for a white neighbor to become their son’s legal guardian so that Joe could purchase the homestead that would become Kawamoto Farm.

In a time before chainsaws and tractors, the family cut every tree by hand and hauled stumps with some help from horses. They cleared all the second-growth forest from the land, planted an orchard, and built the farmhouse and barn that still stand today. Kawamoto Farm became a successful dairy. 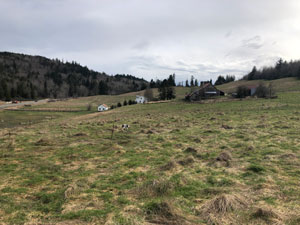 Another view of Kawamoto Farm, cleared by hand and horse generations ago.

When he came of age, Joe Kawamoto took over operations along with his wife, Shigeko, who went by the name “Jean” and was locally famed for her excellent cooking. They lived on this land for the rest of their lives — but for a time, they were also imprisoned.

Executive Order #9066, signed by President Roosevelt two months after the attacks on Pearl Harbor, authorized the forced removal of all persons of Japanese descent, and their imprisonment in so-called “segregation centers.” More than 120,000 Japanese adults and children, mostly living on the Pacific Coast, many American citizens, were forcibly relocated to the camps.

In 1943, along with 25 residents from Jefferson County and 41 from Clallam County, Joe and Jean Kawamoto were sent to Tule Lake Segregation Center in California, the largest of the 10 internment camps in the United States. There, they were treated as prisoners of war, crammed into crowded tar-paper buildings which were sweltering in the summer and bitter cold in the winter. Barbed wire, guards armed with machine guns, and public outdoor latrines were part of their daily lives. 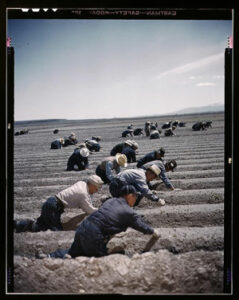 After six months at Tule Lake, Joe volunteered to work in the fields. Based on their farming experience, he and Jean were transferred to live at a family farm in Idaho. There, the two of them had their own house to live in and became friendly with the family. The family’s two sons even drove back to Washington to fetch the Kawamotos’ car for them so they could have more freedom.

The period of incarceration, which lasted until the end of WWII, decimated Japanese American farms. While some farmers were able to arrange for neighbors to rent or otherwise maintain their farmland, more found themselves forced to sell their land and equipment for well below its worth to white people willing to take advantage of the situation. By the time the war was over, many Japanese American families had lost almost everything, and few returned to farming.

Fortunately, the Kawamotos had entrusted the care of their farm to their neighbors, a young white couple, who lived in the farmhouse and kept the dairy running until the Kawamotos were able to return home. The two couples remained friends for the rest of their lives.

Eventually, the family switched from dairying to running beef cattle. The Kawamotos’ only child, Ray, went on to join the military and have a career independent of the farm, but he kept it running for much of his adult life until he passed away in 2016.

The REPI easement, which closed last month, will limit development on the property and require that both parcels of the farm remain under the ownership of a single entity, eliminating the possibility of subdivision and keeping the land available for agricultural and forestry uses. REPI enhances military readiness by promoting compatible development and protecting valuable habitat while buffering existing military installations and operations.

The conservation easement, which we hope will close this year, will define the future building parcel, proscribe forest management practices that protect habitat, and give the Land Trust the right to install an interpretive display on the farm to educate the public about the farm’s Japanese American history.

The Land Trust plans to partner with the Kawamoto family and local organizations to ensure that Kawamoto Farm continues to thrive as a working farm forever, and that the legacy of its homesteaders is preserved for all time.

To watch a video about the history of Kawamoto Farm and the Kawamoto family, click here.

To read the history of those imprisoned at Tule Lake in their own words, click here.

During the early fall of 2021, in partnership with the Land Trust and other community organizations, Jefferson LandWorks put out a request for proposal (RFP), offering farmers a unique opportunity to apply to purchase Kawamoto Farm at a significantly reduced price. The 65 parties who submitted letters of interest during the RFP process were invited to two “open houses” at Kawamoto Farm in late October, and more than 100 people attended over both days. Representatives from the Kawamoto family, Jefferson LandWorks Collaborative, and Jefferson Land Trust were on hand to answer applicants’ questions, familiarize them with the property, and hear about their hopes for the farm. Read more here.