This ancient corridor of forest and wetlands not only preserves important wildlife habitat — it is also a route to resilience for species adapting to climate change. The Duckabush Oxbow and Wetlands Preserve runs about a third of a mile along the north side of the Duckabush River, and includes an oxbow pond that sometimes links up with the River when it floods. North of the floodplain, a forested slope rises toward Duckabush Road.

Across the river on the south side, the Duckabush Riparian Forest stretches along 1.3 miles of river frontage. Mature second-growth forest overhangs a shoreline slope, some of it quite steep, rising more than 400 vertical feet from the Duckabush River.

Just upstream from the Canal Tracts subdivision in the channel migration zone of the lower Duckabush River, the Land Trust has acquired and consolidated three separate habitat properties into a single preserve. The approximately 40-acre Duckabush Oxbow and Wetlands Preserve protects this gorgeous stretch of the river from development forever, and hosts abundant wildlife throughout the year.

The mature second-growth, low-elevation native forests that make up much of the Preserve regularly flood in the winters as the Duckabush River swells with the seasonal rains. The side channels on the Preserve act as a refuge for juvenile salmonids in these floods, as they work to stay in the freshwater until they are ready to head out into the marine environment to begin their lives as adults.

The Land Trust has partnered with Jefferson County’s Department of Environmental Health to acquire some of these properties and to restore native plant communities to some previously disturbed zones.

A new restoration area opens up

Salmon habitat specialists see the area the Land Trust has acquired as a priority location for salmon recovery. The river follows a natural channel and is free to flow throughout the valley floor, while the surrounding forests are mature and provide lasting structure and shade to the dynamic movements and habitat of the river.

Some restoration work has occurred on these properties, including the removal of a cabin and associated development, clearing out invasive populations that were reducing the potential habitat quality of the property, and replanting native trees and shrubs. There are several committed Preserve Steward volunteers that lead work parties to continuously improve the habitat conditions – and simply enjoy the natural magnificence of the area.

A route to resilience

This corridor along the Duckabush River not only protects important spawning and rearing habitat for endangered salmon and numerous other species that have relied on it for thousands of years, it is also a link between the mountains and the sea, between the marine waters of Hood Canal, and the mountains and watersheds of Olympic National Forest. By establishing permanent corridors and habitat continuity between these ancient ecosystems, we can support a wide variety of species – fish, insects, amphibians, mammals and birds – as they struggle to adapt as climate change alters local ecosystems. 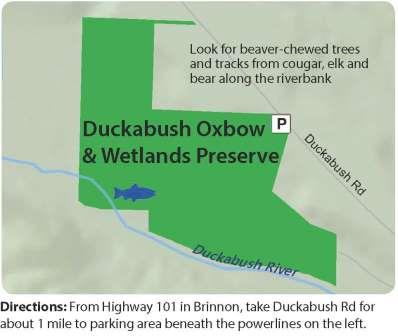