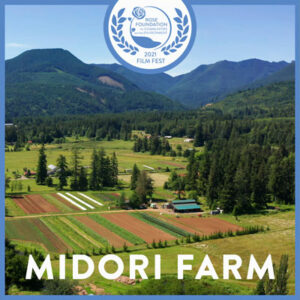 The Land Trust’s short film about Hanako Myers and Marko Colby’s Midori Farm in Quilcene (permanently protected in 2017) will be included in the Rose Foundation’s 2021 Virtual Film Fest!

From September 1-21, you can watch “Midori Farm” on demand, along with a great selection of independent films. Just one ticket to the Film Fest gives you access to more than 20 independent shorts and feature-length productions that celebrate grassroots activism and climate resiliency.

And don’t forget to check out the Film Fest Trailer.

About the Film Fest and the Rose Foundation

Every year, Rose Foundation hosts their Film Fest, showcasing unique and powerful stories of community action through film. By joining the 2021 virtual Film Fest, you’ll get to see some great films, while also directly supporting grassroots activism! All proceeds from this event directly benefit the Rose Foundation’s work to build the grassroots movement for cleaner, healthier, and more just communities.

The Rose Foundation for Communities and the Environment is a public foundation based in Oakland, California which supports community-based conservation, justice, and equity initiatives throughout the Unites States. As part of its partnership with Puget Soundkeeper Alliance to steer funding from Clean Water Act pollution settlements back to impacted communities and watersheds, the Rose Foundation recently awarded the Land Trust two years of grant funding. This financial support will enhance the health of local streams through community-supported restoration and stewardship, and create and implement a Wetland Ecological Health Assessment protocol for wetlands in Jefferson County, all of which feed into the Salish Sea and support threatened marine wildlife such as salmon and orcas.