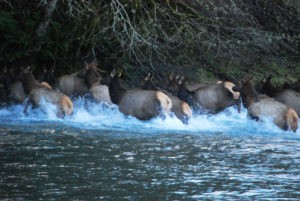 The Duckabush herd of Roosevelt elk were photographed during a thunderous river crossing at Duckabush Oxbow and Wetlands Preserve by local photographer Artemis Celt.

The Duckabush River greenbelt hosts many animals that have relied on this land for thousands of years. In addition to providing important spawning habitat for endangered salmon, wildlife such as bear, beaver, and cougar have all been observed there recently. And one more common, but no less magical, sighting on the Duckabush is its herd of Roosevelt elk.

Just 20 years ago, the Duckabush River herd numbered fewer than 40. Today, according to Bryan Murphie, their population has more than doubled.

Murphie, who is pleased with their comeback, works as a wildlife biologist for Washington Department of Fish and Wildlife (WDFW) and has been studying the herd since 1998. He credits their growing numbers, in part, to the Duckabush River Valley habitat that the Land Trust and others have worked for years to protect. The landscape where these elk roam is along a permanently protected wildlife corridor of more than 3,250 acres.

“Elk can be quite communicative with one another, calves and cows, but also the bull elk bugling,” said Murphie. “In September and October during the rut (the time when male elk, or bulls, vie for the hearts of their female counterparts) when the bull elk are most vocal, is an exciting time to see and hear them.”

The Duckabush River elk are fairly used to being around people. However, the public should minimize disturbance in late winter and during calving. This is why the Land Trust’s Duckabush Oxbow and Wetlands Preserve is closed to visitors from December through April. This seasonal closure gives wildlife a break when they’re most vulnerable.

Named for Teddy Roosevelt — who helped preserve elk herds by protecting Olympic National Monument — these elk are important to the local ecosystem and culture. Murphie believes they have an intrinsic value and are important for a variety of reasons: 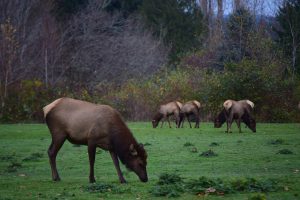 Roosevelt elk enjoy foraging in open spaces such as meadows, forest clearings, and the valley floor. Photo by Caitlin Battersby.

When Murphie first started working with the elk herd, they spent their summers in Olympic National Park, and winters in the Duckabush River Valley. Now, however, many of them stay in the valley year-round.

According to Murphie, there are three primary groups in the herd that mix intermittently. One group remains in the lower to middle portions of the valley year-round and is most often seen by visitors. A second group has moved southward along the power line corridor. The third group is migratory; it mostly stays in the upper valley, but is thought to occasionally venture into Olympic National Park.

Murphie believes there are a few reasons the herd has increased in size and many of its members are staying in the valley year-round. A conservation closure, initiated by WDFW and local Tribes, that prevented hunting elk in the Duckabush River Valley for a few years played a role in their success.

At the same time, logging increased, which improved forage conditions in parts of the valley. The diversity of habitats available like newer clearcuts, riparian and natural forest corridors adjacent to the river, private pastureland, and older or mature forest stands created favorable conditions for the elk.

The open space in the valley floor offers relief from the river valley’s rugged slopes. Elk may traverse steep slopes as they migrate, but prefer to graze and spend time in more moderate terrain like the valley floor and upland forests adjacent to the river.

According to Murphie, as the Duckabush elk herd has grown, many of those managed forest stands that produced good forage for them in the 1990s have aged to the point where they have less value. Thus, the riparian corridor and mixed forested stands along the river valley have become a more important resource for the elk. Having found sufficient food in the lower valley to remain year-round, they began migrating less and less into the Park.

The corridor of natural land along the Duckabush River, much of it protected and restored by Jefferson Land Trust and our partners, has made a difference for these Roosevelt elk. Our focus on protecting contiguous, connected expanses of habitat and managed forest is paying off. This work is crucial for keeping the Duckabush a wild, vibrant river into the future.

The Duckabush River corridor provides a link between the mountains and the sea, from the marine waters of Hood Canal to the mountains and watersheds of Olympic National Forest. This protected corridor also permits wildlife to move to the sanctuary of higher altitudes if necessary.

The Duckabush River is a local treasure with rich wildlife habitat that a consortium of partners including Hood Canal Salmon Enhancement Group, Jefferson County, Jefferson Land Trust, the Navy, The Trust for Public Land, Washington Department of Fish and Wildlife, and others continue to collaborate to protect and restore. See it for yourself with a visit to our Duckabush Oxbow and Wetlands Preserve.

Enjoy the gallery of wildlife elk photos below. All of the images were captured in the summer of 2018 by one of our volunteer Preserve Stewards with her tree-mounted, motion-detecting wildlife camera.