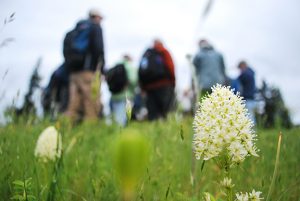 Today, less than 5 percent of Western Washington’s original prairies remain. A great place to see some for yourself is at the Kah Tai Prairie Preserve in Port Townsend. Photo by Caitlin Battersby

Nestled on the grounds of the Port Townsend Golf Club is a small plot of wildflowers that have lived there for many thousands of years. A remnant of the prairies that once covered the Kah Tai Valley — from Kah Tai Lagoon to Chinese Gardens — this 1.2-acre preserve is a direct link to the distant past.

Imagine: 16,000 years ago, the Olympic Peninsula lay under 3,000 feet of glacial ice. Then, as temperatures rose, the glaciers began to retreat, leaving trails of crushed rock in their wake. Beautiful, drought-resistant wildflowers and grasses emerged on these sandy soils and thrived during a warm, dry period that lasted until 5,000 years ago. Over time, the weather gradually became cooler and wetter, and the balance tipped in favor of forests. Where prairies had once thrived untended, shrubs and trees began invading these open spaces­ and overrunning the sun-loving grasses and wildflowers… Unless humans intervened. 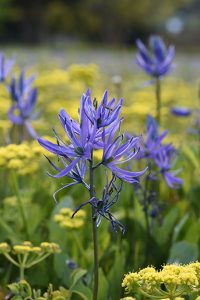 Blue camas, pictured here amid “spring gold” lomatium, was an important traditional food staple for Native people of the Pacific Northwest. Camas bulbs were more widely traded than any food other than dried salmon. Photo by Katherine Darrow

The Native tribes who inhabited this land for millennia needed the prairies. They were crucial food sources, supplying edible roots like blue camas bulbs and rich grasses that attracted elk and deer. Local tribes intentionally cultivated and maintained their prairie “gardens.” They saved and replanted small bulbs as seed stock, and only harvested each area every few years to give the plants time to regenerate.

More critically, Native people managed the prairies by deliberately burning them every one to three years to keep them clear and open. When fire sweeps through a prairie, it destroys invading shrubs and evergreen trees. However, as prairie plants can regenerate from their roots, they are able to survive fires.

When settlers came to our area, they were attracted to the open prairies. First-generation resident James McCurdy described the Kah Tai Valley as having “the appearance of a beautiful park. Myriads of wild flowers transformed the valley floor into a many-hued carpet.” Preferring open spaces to shady forests, pioneers quickly claimed prairieland for farming and homesites. Native tribes were displaced and discouraged from burning the land, and local prairies were largely lost—overtaken by forests, farming and development. Today, less than 5% of Western Washington’s original prairies remain. 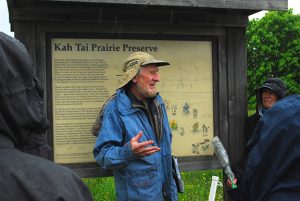 Fred Weinmann (above) of the Washington Native Plant Society is one in a long line of people who have cared for the patch of land that is now Kah Tai Prairie Preserve, the last remnant of the prairie that once stretched from Kah Tai Lagoon to Chinese Gardens.

In Port Townsend, one remnant escaped this fate and survived. It’s on land used as the rough for a couple of holes at Port Townsend Golf Club. A number of local botanists and naturalists studied the prairie plants, among them were Nelsa Buckingham, Robert Steelquist, Janet Kearsley, Jerry Gorsline, and Gerry Bergstrom.

In 1986, the Washington Native Plant Society (WNPS) Olympic Chapter entered into an agreement with the City of Port Townsend to maintain the prairie for 25 years. Thus, the Kah Tai Prairie Preserve was created. (In 2011, the agreement was renewed for another 25 years.)

WNPS members like Dixie and Dave Llewellyn, Forest Shomer, and Ann and Fred Weinmann care for the preserve, working to keep invasive weeds at bay so the prairie continues to flourish. According to Fred, caring for the prairie is a well-honored tradition. “There’s no such thing as a prairie in our area that wasn’t managed by humans,” he said. “Without people, trees would take over. Western Washington grows trees everywhere.”

The preserve is open to the public. Visitors can use the Port Townsend Golf Club parking lot. Ann recommends parking near the kiosk (pictured above), examining the plants illustrated on the large kiosk sign, and then looking over the prairie to see what blooms you can find. While the blue camas will have finished blooming, death camas, native buttercup, and larkspur should still be on display through the end of May.

When is the best time to visit the prairie to see the spring bloom? “Things start to bloom in March,” according to Forest, who is a native seed man by trade and is also one of the founding board members of Jefferson Land Trust. He continued, “It builds throughout April. And the peak viewing time is usually the first week of May, but this can vary by a week or two depending on the weather.”

Fred explained that the best way to care for the prairie is to let it burn. Otherwise, the prairie plants soon use up the nutrients in the soil and flowers get less abundant. “If you burn in the fall, the next spring there’s still not so much in bloom because they’re relying on nutrients already stored in the bulb. Then, the following spring, there’s a big bloom because they have access to those nutrients from the burn all through the growing season,” he said. There have been a few controlled burns at Kah Tai Prairie over the years. “Open burning in cities is illegal, so you need to get special permits. We might find a way to get it done again. It would be nice to burn again,” he said. Following millennia of tradition on this land, preserving this important piece of prairie will continue to require human care.

“There’s no such thing as a prairie in our area that wasn’t managed by humans. Without people, trees would take over. Western Washington grows trees everywhere.”