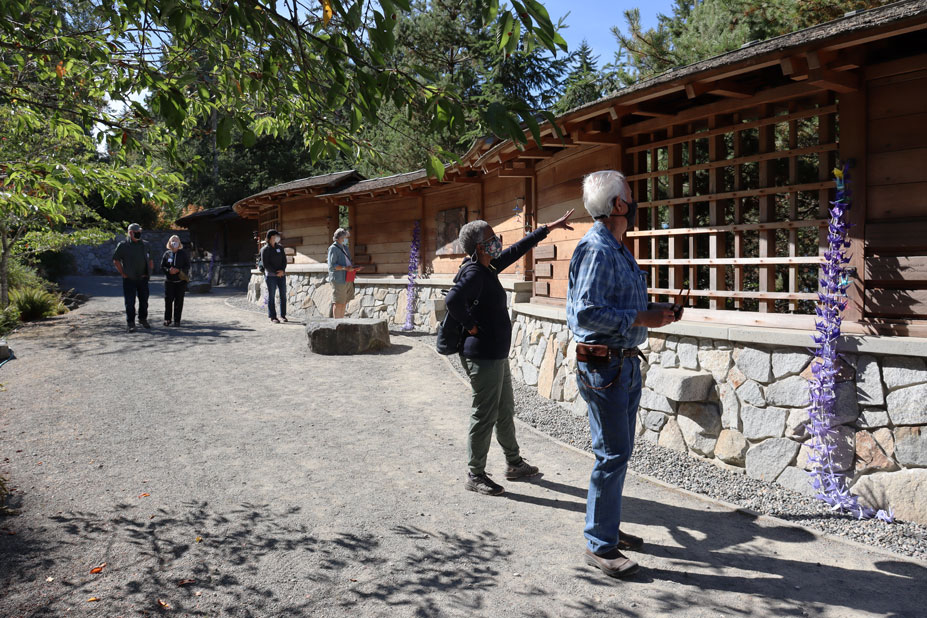 Land Trust staff, board members, and partners took a field trip to Bainbridge Island this month to tour the Japanese American Exclusion Memorial and visit an organic farm owned by the Nakatas, a Japanese American family with deep farming roots on the island.

The trip was planned to coincide with and inform the Land Trust’s ongoing work to protect Kawamoto Farm, a historic dairy in Quilcene homesteaded by Japanese American immigrants and their descendants, some of whom were forced into concentration camps following President Roosevelt’s signing of Executive Order 9066 after the bombing of Pearl Harbor. The Land Trust plans to work with local partners to create an interpretive display at Kawamoto Farm to honor the history of its founders.

Our volunteer guides, Lilly Kodama, Joyce Nishimura, and Carolyn Hart, welcomed our large group. They explained that the memorial, a flowing wall constructed almost wholly from a single ancient cedar tree, follows the same path walked by the 227 Bainbridge Island residents who, on March 30, 1942, became the very first Japanese Americans to be deported to the camps. On the wall is the name of each person who walked the path and stepped onto the ferry that waited at the end of the road to carry them from their island home. 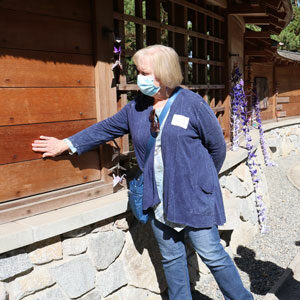 Almost all the wood in the memorial was salvaged from a single ancient cedar tree.

We were captivated by the stories Lilly and Joyce had for us: tales of the Japanese American community on Bainbridge in prewar days, many of whom homesteaded farms there; the pain of being ripped unjustly from the lives they had worked so hard to build in the nation they called home; the community members who cared for the farms, homes, and pets of their imprisoned neighbors and spoke out against the injustice; and those who took advantage of the injustice.

We were also lucky to be joined by self-proclaimed “wood guy” John Buday, who explained how he joined architectects, timber-framers, and many others who volunteered their time and resources to help the Bainbridge Island Japanese American community complete the memorial. The beautiful site, designed by renowned local architect Johnpaul Jones, is an incredible tribute this community worked toward, fundraised for, and dreamed of for many years and across many generations.

After thanking our kind hosts for a profound morning, we carpooled to the Nakata family’s MiddleField Farm, where we were warmly received by brothers Larry and Ron Nakata and head farmer Brian MacWhorter. The Nakatas are cousins to the Kawamotos and have lived on Bainbridge for five generations. Their farm helps supply their family-owned local grocery stores, Town and Country Market (Bainbridge) and Central Market (Poulsbo), with fresh organic produce. 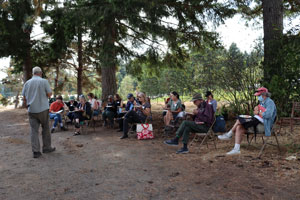 We had much to learn from the Nakatas, who generously shared stories of their family and of the island’s Japanese American farming community. Brian imparted a wealth of knowledge about local agriculture and the challenges facing small-scale farmers in our region, such as lack of available, affordable farmland and climate change — two issues which the Land Trust is actively working to address through land conservation and habitat restoration. A tasty highlight was a sampling of delicious freshly-picked heirloom tomatoes.

We were deeply honored and moved by this invaluable day of learning. Our hosts taught us so much and welcomed us so generously, sharing the stories of a resilient community whose history in this region runs deep — and must never be forgotten.