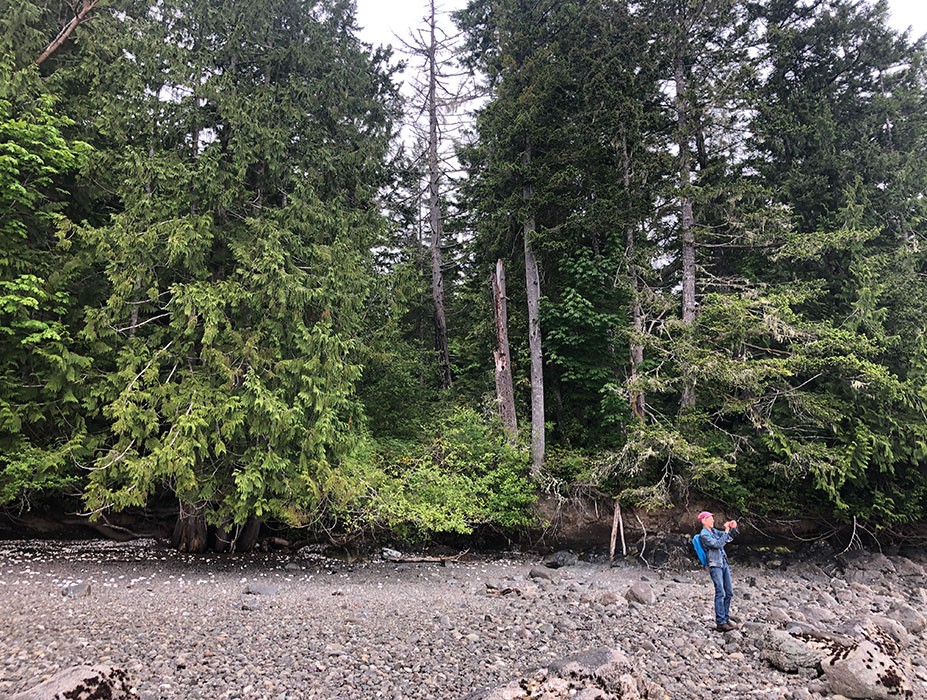 The property north of Brinnon contains Hood Canal shoreline as well as mature and old-growth forest.

Please join us in celebrating the recent protection of a beautiful 32-acre upland forest and shoreline property that was generously donated to the Land Trust by Carolyn and Clayton Wright after being in Carolyn’s family for more than a century.

Located just north of Brinnon along the west side of Highway 101, with a sliver of Hood Canal shoreline, this extraordinary parcel contains key wildlife habitat, including some of the Olympic Peninsula’s last remaining old growth forest. 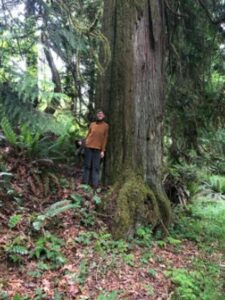 Jefferson Land Trust’s Conservation Coordinator, Blaise Sullivan, poses beside a huge Western Redcedar tree during a visit to the property.

“To find a parcel of land in this region with mature forest that’s also connected to the shoreline is very rare. It has an incredible amount of conservation value, and benefits a lot of wildlife species,” says Sarah Spaeth, the Land Trust’s Director of Conservation and Strategic Partnerships. “We’re so thankful that Carolyn and Clayton chose to work with us to protect it forever in this truly generous way. It’s such an amazing gift.”

In addition to old growth, the property contains mature forest, some portions of which demonstrate the complexity and characteristics of old growth. It’s also part of a migration corridor used by the Brinnon elk herd and other large mammals. Seasonal streams pass through a ravine that runs east underneath the highway, emptying into Hood Canal, offering safe passage between forest and shoreline for wildlife. Both the Washington Department of Fish and Wildlife and Jefferson County identify the shoreline here as Priority Aquatic Habitat.

The property was initially acquired by Carolyn’s family, the Irles (pronounced “earl”) in 1916. According to family lore, one of her ancestors, Dr. Ruth Irle Davies, provided medical services to a patient who couldn’t pay the bill and offered the property as compensation instead. It was passed through the family until it came into the possession of Carolyn’s uncle, Roger D. Irle. Roger grew up on Monroe Street in Port Townsend in the 1930s and 40s. He left to attend Harvard, eventually earning a doctorate degree in Sociology and later a degree in Divinity, becoming an ordained Presbyterian minister, teaching sociology in Illinois and at the University of Oxford, and finally retiring to Sumner, Washington. 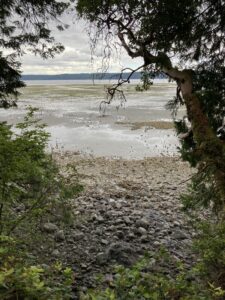 Looking out from the property’s forested shoreline forest at the beach during a low tide.

Over time, he became tired of the constant letters he received from loggers interested in cutting the forest of the Brinnon property, and worried about tree poachers and interlopers. He offered it to Carolyn, his “favorite niece.” If she and Clayton didn’t take it, Roger said, he’d consider giving it to a conservation organization. After some reflection, they decided to accept the property.

Roger passed away in June of 2022. Carolyn and Clayton currently reside in Spokane, and, Clayton says, had no practical use for the land. Their deep love of Puget Sound caused them to consider Roger’s suggestion to give the land to a conservation organization so it would remain undeveloped.

Clayton explains, “We had heard about how Hood Canal has suffered from oxygen depletion and red tides, and didn’t want to add one more septic system to contribute to the problem. We couldn’t use the land ourselves and it seemed indecorous to sell it for money so some other family could turn it into a vacation spot. We were also concerned that the upland forest would be logged, which was anathema to us as environmentally conscious people, and would be a crime after having been preserved for so long.”

The property was zoned for residential development, allowing up to six residences plus additional dwelling units to be built. The property’s valuable timber also made it vulnerable to logging. These actions would have dramatically and negatively impacted wildlife populations, disrupted the connectivity of the wildlife corridor and waterways, and risked the future of the precious old-growth forest. 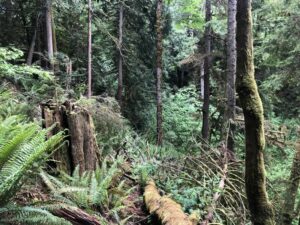 Much of the 32 acres is covered in forest, including mature and old-growth trees.

Clayton visits Port Townsend often, and in early 2021, he stumbled upon the Land Trust’s office while strolling through Uptown. He says, “We were delighted that there was a local conservation organization to donate the property to, rather than a national organization that had no particular connection to Washington State or Puget Sound.”

After conversation with Carolyn and Clayton, our conservation staff and the community volunteer members of the Conservation Projects Committee visited the property in Brinnon, and realized quickly how special it was.

“Walking onto the land was astonishing,” says Sarah. “The enormous old-growth cedars, firs, and maples, and the ravine, elk tracks and bear scratches on trees — it was all magical.”

To ensure the land can never be developed or deforested, the Land Trust sold the development rights to the U.S. Navy through the REPI (Readiness and Environmental Protection Integration) program at a bargain sale rate, placing a restrictive easement on the land. The REPI funding the Land Trust received will help us remove some dilapidated structures and carry out stewardship activities and monitoring on the land, now and into the future. 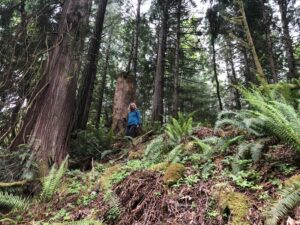 Land Trust Director of Conservation and Strategic Partnerships, Sarah Spaeth, on a site visit to the property.

“We feel we have been good stewards of this land by donating it to a responsible organization which will protect it and maintain it in its natural state in perpetuity,” says Clayton. “Working with Jefferson Land Trust to secure the land from development was an efficient, personable, and thoroughly enjoyable experience. We know Roger would be happy with this outcome.”

“Donating land to be protected by a Land Trust is truly a huge act of generosity,” Sarah says. “It speaks to landowners who want to leave a legacy.”

Please join us in honoring Carolyn, Clayton, and the late Roger Irle for their actions of care and generosity toward this land, which has resulted in the permanent protection of 32 acres of critical upland forest and wildlife habitat in Jefferson County — an extraordinary gift to our community, local wildlife, and to the future.