Students For Sustainability: 10 Years of Action Against Climate Change 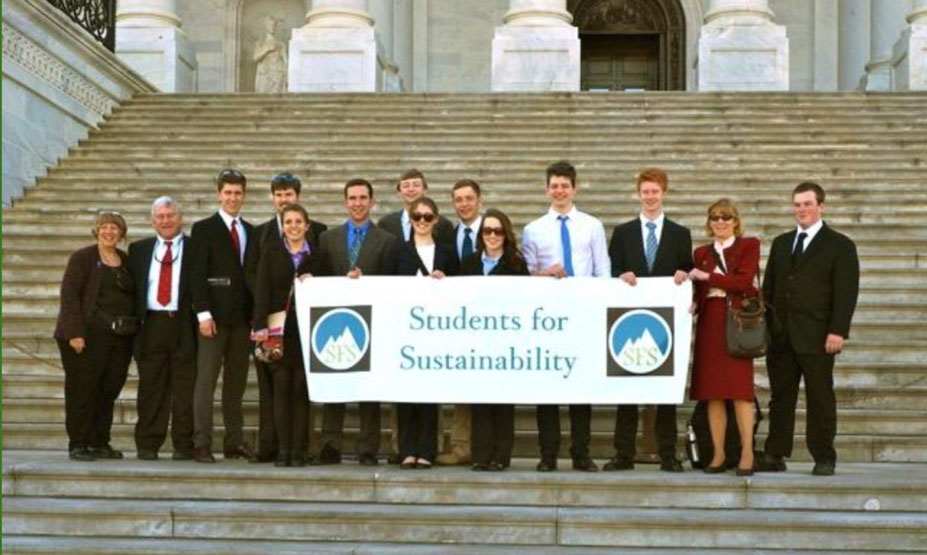 Port Townsend High School’s Students For Sustainability club in Washington D.C. in the spring of 2014.

In 2011, a sophomore science class at Port Townsend High School (PTHS) piloted a climate change curriculum which, rather than prescribing solutions, challenged students to come up with creative approaches to fighting climate change themselves. When the unit ended, some of the class began meeting once a week during lunch to continue to learn, strategize, and take action.

In this way, Students For Sustainability (SFS) was born. A decade later, it’s still going strong.

“We’re a group of like-minded students who are passionate about wanting to do our part in protecting the environment,” says Hailey, current co-president of SFS. “It’s the most important issue of our time. No planet, no nothing.”

Co-president Lochlan says, “Within a lot of youth-led organizations, you see older generations trying to help by coming in and saying, ‘This is how we’re going to fix it.’ But the youth are the ones who are going to have to deal with whatever happens to our planet. I think it’s important that we can lead these movements.”

From the beginning, SFS has been student-led. That means they brainstorm ideas for projects and take it upon themselves to put their ambitious ideas into action, learning as they go. 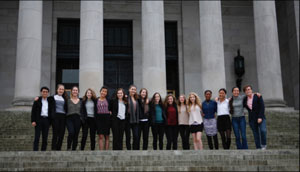 SFS visited the state capitol in Olympia in 2017 in their pursuit of a statewide bottle bill.

“‘Systems thinking’ is a recent buzzword — this idea of looking at the whole picture and all the moving parts before coming up with a solution,” says Laura Tucker, youth environmental educator and the club’s longtime advisor. “Well, these students did that right from the beginning, even though nobody taught them how. Over the years, they’ve consistently had vision and out-of-the box ideas.”

After one of the students in the club proposed the idea a few years ago, the club members did their homework, so to speak, and found that bans on single-use plastic straws and coffee stirrers — already successfully implemented in other US cities — reduce carbon emissions, eliminate unnecessary waste, and save businesses money.

So they got to work researching how to pass a city ordinance.

In 2019, they drew up a petition and gathered over 1,500 signatures on the streets of Port Townsend. They met with downtown businesses to ask them how they felt about the proposed ban, bringing with them examples of reusable and compostable straws and information about how much money businesses stood to save; 35 local businesses eventually signed their support. They also met with the hospital and with representatives of local disability groups. 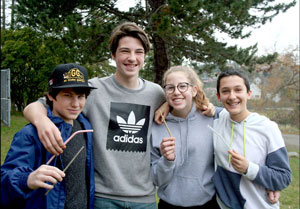 SFS’s citywide straw ban was one of their most ambitious projects to date. Photo by Brian McLean, courtesy of the Peninsula Daily News.

As they prepared their presentation for public comment before the Port Townsend City Council, SFS reached out to the greater community, requesting them to voice their support for the ban to City Council members.

“We had these flyers with City Council members’ emails and a statement people could use,” Lochlan explains. “I think that was really helpful, because when we showed up to the public comment meeting City Council members had already heard about the idea directly from people in the community.”

Their three-minute presentation earned them a meeting with the City Council. By 2020, SFS was working with City Attorney Heidi Greenwood to help write the ordinance. The ban earned unanimous final approval from the city council in July 2020 and went into effect on January 1, 2021.

It was, Hailey recalls, an especially memorable moment for everyone in SFS: “We did all the work, and it paid off.”

SFS has a 10-year history of ambitious projects and achievements. Their first undertaking, back in 2011, was reviving PTHS’s recycling system. After speaking with school janitors and personally conducting waste and energy audits of the school dumpsters, SFS did the math and found that the money saved on trash collection would be enough to cover the costs of a schoolwide recycling system.

In the process, they also discovered that the school’s biggest source of waste was the disposable food service materials from the cafeteria. This led to their next major project: implementing reusable plates, trays, and cutlery at PTHS.

After research and analysis, they were able to prove that the school could save $10,000 a year by making the switch to reusables. Their call to the community for material donations left them with so many plates, bowls, cups, and cutlery that they were able to donate the excess to the middle and elementary schools.

Some of the students who’d begun the project had already graduated by the time the new system was finally integrated three years later, but the program remains in place today.

Over the years, SFS has organized beach cleanups and climate strikes. They’ve installed hydration stations to encourage reusable water bottles at PTHS and organized dish drives to replace broken cafeteria-ware. In their attempt to pass a statewide bottle bill, they met with lobbyists and politicians at the state capitol in Olympia, and they trained at Al Gore’s 2017 Climate Reality Leadership Conference in Bellevue. They’ve given presentations about their work as far away as the Youth Environmental Summit in Yakima and as near as Finnriver Farm & Cidery in Chimacum. 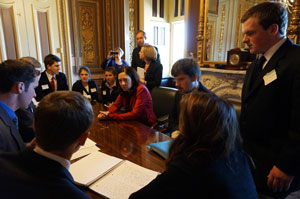 Students from SFS meeting with Senator Maria Cantwell at the U.S. Senate.

Notably, in the spring of 2014, SFS members took a low-carbon journey to Washington DC — via buses, ferries, and trains — to lobby for climate change. The issues they wanted addressed were ocean acidification and fracking, and their ask was a carbon tax to offset the environmental threats from the burning of fossil fuels. Washington Senator Maria Cantwell had previously sponsored a bill proposing a carbon tax, but it failed. SFS met her in the senate lobby to ask her to try again.

“They had done so much preparation and practice, and it went off like it was choreographed,” Laura recalls.

They also met with representatives from the State Department, the President’s Council for Environmental Quality, and Washington Senator Patty Murray, who informed them that their innovative efforts to mitigate climate change at PTHS had earned them the 2013 Presidents’ Environmental Youth Award. 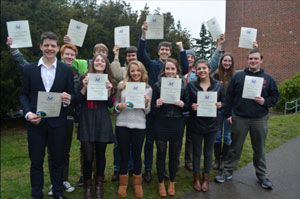 The students fundraised for over a year to afford the trip. To offset the carbon footprint, they partnered with Jefferson Land Trust to plant trees at one of our preserves.

“The whole group is just off-the-scale amazing,” says Laura. “They’re tired of excuses, and they’ve got a really positive vision. If you get out of their way, they will move mountains.”

Although SFS has learned the hard way how to affect real change within the system, Hailey and Lochlan are quick to point out that the seed of this collective action is in the individual responsibility taken by every member of the club to mitigate climate change — a responsibility which belongs to each of us.

“I hear a lot of people saying we need changes at the institutional and national government levels, which is obviously true. But I hear that kind of thinking a lot, and it feels pretty dangerous to me,” Lochlan says. “I feel like it takes a level of responsibility off you. Sure, the government needs to act, but we’re a nation of individuals and the individual is supposed to have power. Use that power. Make organizations. Start movements. Work with people. Don’t just wait for some higher-up to start something because if you think about it, every big movement in history has started with individual people.”

“It’s all about every individual doing as much as they can,” Hailey adds. “Not everybody has to do it perfectly, but everybody can find places where they can make changes in their lives. We can work our way down to zero waste and zero emissions.”

On the heels of the successful straw ban, SFS is currently pursuing an idling ban, which would limit vehicles idling within the City of Port Townsend. Transportation is the world’s number one source of greenhouse gas, and it’s estimated that unnecessary vehicle idling wastes 20 – 70% of a gallon of gas per hour. The ban would prohibit idling for over three minutes in the City of Port Townsend. You can learn more here and sign the petition online. Members of SFS braving the rain to work on their recently installed native plant garden at PTHS.

Another venture is the native plant garden they recently installed in the PTHS school garden. The shady corner space, which used to be unused and covered with a tarp, is unrecognizable after their hard work during the 2020-21 school year: Nootka rose Oregon grape, salal, salmonberry, serviceberry, mock orange, and other plants make for a biodiverse garden. Hailey hopes that in the future, the garden will act as an “education lab” where students can learn about native wildlife and biodiversity.

“I think it’s important for people to learn to grow things so they can sustainably grow their own food,” says Lochlan. “I feel like that might be pretty important in the future.”

The 2021 school year was a tough time to be a high schooler. Although SFS had to meet via Zoom, they were able to organize work parties at the native plant garden and volunteered to help audit recycling at the Port Townsend Transfer Station.

They were also special guests at Jefferson Land Trust’s 2021 FutureFest online gala in early July, where we featured a video showcasing their efforts and were thrilled to present them with a check for $1,000 to continue their innovative, important work in our community and beyond.

“I’m happy with what we were able to do considering the circumstances,” says Lochlan. “The garden really came along. We’ve gotten 200-plus signatures for the idling ban and are getting in contact with [City Attorney] Heidi Greenwood again.”

Hailey says, “Considering we didn’t get to meet face to face, I was impressed at how much everybody in the club stayed committed. It’s an amazing community and a bunch of really driven and kind people. It ends up being like a kind of family. And that’s the fun part.” 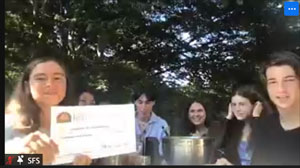 SFS members were special guests at our FutureFest online gala.

You can read more about SFS on their website.

All photos courtesy of SFS and Laura Tucker unless otherwise specified.