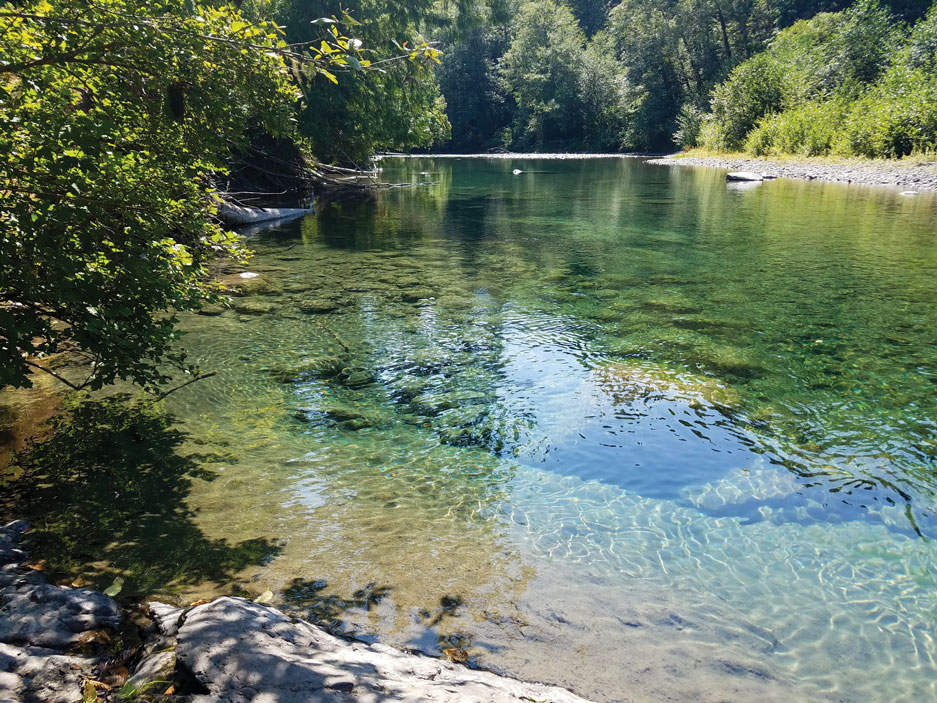 This photo of the Duckabush River was taken by Robert Tognoli, who is also an alumnus of the Tidelands to Timberline course.

Who knows few rivers
will feel most strongly
the shackles of the Duckabush current in June
as water striders slip
on their meniscus boots.

Human feet churn among pebbles,
hard words from the mountains the only ones
offered in colors of the past
more beautiful
for being spoken in this water.

Here spill from the bank
the roots of an alder, clawed by a bear
years ago in spring as sap rose
to make scars
of that rough affection.

Along the upper fork, trails get lost
near where the bear reared
and walked its paws up and down
this pale bark
thick as vellum, unable to heal.

near this big water rushing like time,
so swift,
so close.

She and her husband Joe moved to Port Townsend in mid-2015. According to Jayne, upon moving to the area, she learned about our natural history course on a visit to the Kah Tai Prairie with the Admiralty Audubon Society, and the couple signed up as soon as the course registration opened. 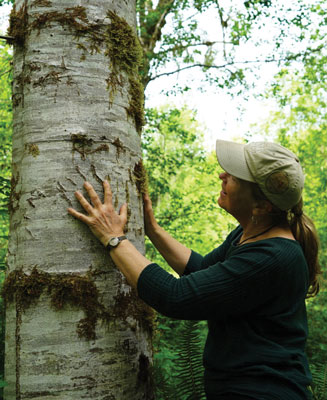 Sarah Spaeth admires the bear claw marks on a tree near the Duckabush River that inspired Jayne’s poem. Photo by Jessica Plumb.

One of the Tidelands to Timberline field days is spent at the Duckabush River, where there’s an alder tree that wears the claw marks of a black bear. While Jayne had to miss that day of class, Joe took her back a few days later to view the tree, and not long afterward she began working on this poem. It was published in 2017 as a Red Bird Chapbook.

Three of Jayne’s poems, “Orcas (A Prelude),” If One Can Speak Seriously of the Sublime,” and “October Salmon” have been part of the arts exhibit Submergence: Going Below the Surface with Orca and Salmon, sponsored by the Endangered Species Coalition and shown at the Jack Straw Cultural Center through July 2. Submergence is an innovative, multimedia exhibit featuring visual art, text, audio, and audiovisual works, centering on the theme of southern resident orca and Chinook salmon co/recovery.

Jayne says that all three works were informed by knowledge and experience she gained in the Tidelands to Timberline course. She was especially excited that, as part of the exhibit, her work “If One Can Speak Seriously of the Sublime” was recorded for the exhibit soundscape by Rena Priest — Lummi Nation Poet and the 2021 Washington State Poet Laureate.