Learning on the Land: Adventures in the Quimper Wildlife Corridor 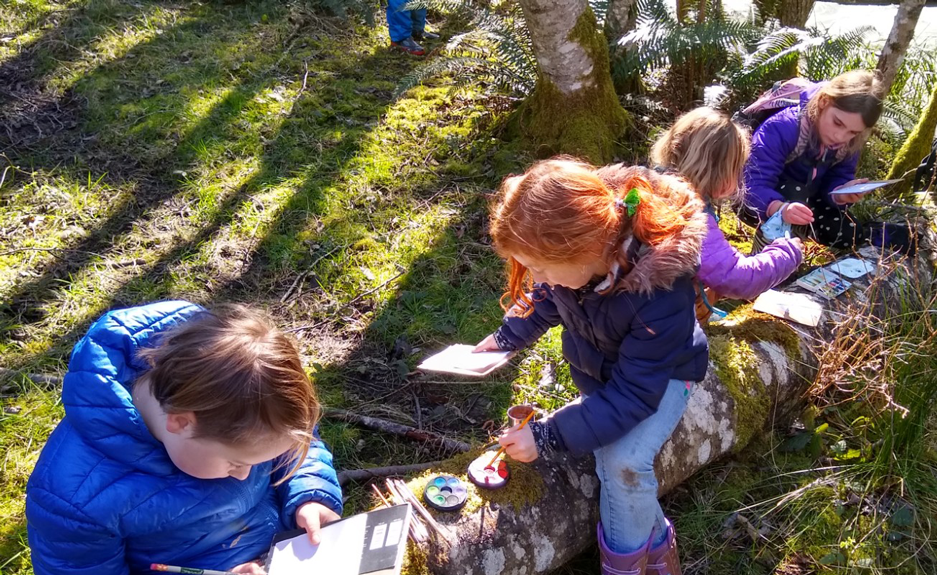 The Rhododendron Riders make use of a downed alder during a sun-dappled watercoloring session in the Quimper Wildlife Corridor.

This past winter, as the pandemic restricted travel and kept kids home from school, many in our community sought refuge and connection in the natural spaces nearest to our own neighborhoods. If you went walking on the trail system (Cappy’s Trails) that winds through the Quimper Wildlife Corridor on a Monday in February, you might have run across a group of local kids who could identify every tree in the forest.

“It’s smooth and it has some bumps,” observed Abraham, age seven, running his palm over the trunk before correctly identifying it as a red alder.

“This is a Western redcedar,” said Louisa, also seven, looking at a tree a few feet away. “The bark is kind of strippy. The leaves have a scaly snake texture. And the branches always curve down and then up.”

Meanwhile, Agnes, age nine, examined a cone she’d found on the ground beneath a towering evergreen. “This pinecone looks like it has little snake-tails or tongues,” she said. “Only the Douglas fir has that.” She grasped a low-hanging branch and continued, “The needles grow all the way around the twig. The bark has big cracks in it.” 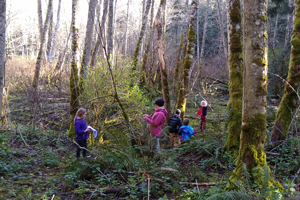 A handful of Rhododendron Riders and a couple of accompanying grown-ups engage with local plant life in the Quimper Wildlife Corridor.

The group was formed in the winter of 2020, when Erik Kingfisher, Jefferson Land Trust’s Stewardship Director, began leading a crew of neighborhood kids, including his daughter Louisa, on adventures in the Quimper Wildlife Corridor.

“Of all the things that have changed, or of the things I’ll try to remember from COVID, this will definitely be one of the silver linings,” says Erik. “I was able to use some flexibility in my schedule to be there every Monday morning with those kids, and it was a really rewarding thing for all of us. Virtually every time there was bright-spirited laughter and fully engaged kids.”

Every Monday, rain or shine (mostly rain, as it turned out) the Riders, who count in their number seven kids from five households and range in age from seven to eleven, could be found along the corridor’s trails: identifying trees and other wildlife, running, journaling, measuring twigs, painting, hacking invasive holly, or possibly just sitting still, observing the changes in the forest that unfold even in the heart of winter.

“The way we typically did it is we’d meet up and make sure everybody’s got their gear and their snacks and a journal,” Erik explains. “Then we’d bike about a mile to this one particular entry point to the corridor at the end of Howard Road. The kids came up with the name ‘Rhododendron Riders,’ because we’d always start the journey on bikes.”

After leaving the bikes at the forest’s edge and zig-zagging down the trail on foot, the Riders would stop at one particular place where four different species of trees grow. “The first time we stopped there, I said, ‘Let me just point out these four main trees here,’’’ Erik recalls. “‘I want you to understand and know something about these trees. I want you to be able to name them.’” 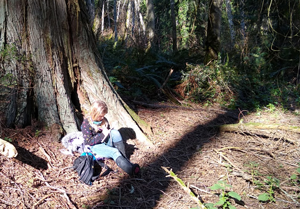 Journaling at the roots of an enormous cedar tree in the Quimper Wildlife Corridor.

The group began to stop at this one specific section of forest every week. Each time, they became more familiar with the trees and could make new observations about them. It was one of many ways the kids began to gain familiarity with the wilderness in their own neighborhood.

“The kids having more knowledge of plants and animals has been so great on our family walks,” says Caroline Ruth, mother to Agnes and Abraham. “They’re like, ‘There’s a Western redcedar!’ and ‘There’s a Spotted Towhee!’”

Another learning activity for the Rhododendron Riders was tying bits of yarn to the twigs of shrubs to monitor their growth over time. In their journals, they took notes and wrote poetry. They might journey to a wetland or up to a dry forest, head for the old bike jump or go to where the soapberries grow, but wherever they went, they’d note what was different about the spot compared to other parts of the Quimper Wildlife Corridor.

And one of the things the Riders observed, soon enough, was that they did not ride alone. At least one other band of nature explorers was regularly using the Quimper Wildlife Corridor as a classroom, playground, and adventure-zone.

“We basically put together a group of five kids from five households, hired [an educator], built a pavilion in our backyard and then let them run with it,” says parent Jean Scarboro. They called the little outdoor school “Little Waves,” and the kids, who ranged in age from three to six, spent most of the winter months venturing into the Quimper Wildlife Corridor from the Scarboros’ back yard. 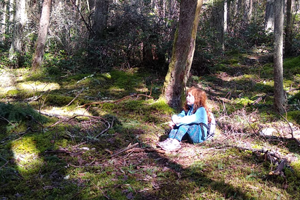 Taking a moment to sit still in nature is a powerful way to connect to the wilderness.

Though younger and shorter-legged than the Riders, the Little Waves were no less bold or capable in their pursuits of plant identification and trail exploration. They made forts among the trees, did lots of coloring pages with Pacific Northwest creatures, and even located a geocache. They hiked around rain or shine, often for two to four hours, and found special places that they named, like “The Spooky Place,” where they especially liked to play.

“A lot of it was pretending to be animals as they ran around the woods,” says Jean, whose daughter, Attica, is five. “What is amazing to me is that Atti now knows the trails better than I do and she can identify more plants than me! She always asks to be outside now and can spend all day outside without wanting to go indoors.”

Although he was doing “these curriculum things,” as Erik puts it, he clarifies that he took his cues from the kids. “I was able to manage their rhythm pretty well because it didn’t have any desired outcomes, really. It’s just like, let’s get out into nature and have fun.”

“They did learn a lot, no question,” says Caroline. “But beyond that, they learned to be really comfortable in the forest.”

Public lands are a priceless resource for local wildlife and for our community. In this case, the corridor unlocked unique opportunities for learning, exploration, and connection during a time when it was sorely needed.

“The Quimper Wildlife Corridor has considerable conservation value as a public place of renewal, a place where we can go and experience the health benefits of natural areas,” Erik says. “The relatively undisturbed wilderness is really healing. It’s a place to generate our own sense of resilience within an otherwise complicated, dynamic, and sometimes painful society.” 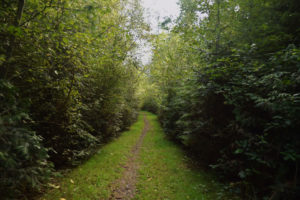 As a wildlife area, this 3.5 mile greenbelt retains many of the values that it’s had for thousands of years and is home to more than 200 bird species, amphibians, and mammals. It links six wetlands along a 100-year floodplain and natural drainage basin — a natural system which protects water quality in local aquifers as well as in the Strait of Juan de Fuca and around Protection Island, where 70 percent of Puget Sound’s seabird populations nest.

“I know for myself,” says Jean, “that the Land Trust preserving pieces of Cappy’s Trails means a great deal to our neighborhood and to my family.”

As summer unfolds across the county, school lets out, and vaccines unlock the possibilities of summer travel, the Rhododendron Riders and the Little Waves may scatter like dandelion down. But the Quimper Wildlife Corridor will always be waiting. And as anyone who spends extended time in wild places knows, the hours spent wandering there never really leave you.

“It was a highlight of my week through the pandemic winter,” says Erik. “It became a highlight for all those kids. And I know, from talking to the kids and talking to the parents, it was a really positive thing they all looked forward to. It makes me really happy and warm inside.” 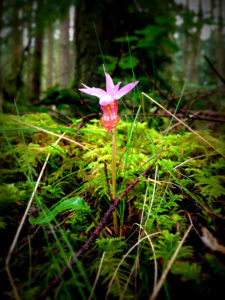 A Fairy Slipper Orchid in the Quimper Wildlife Corridor.

Since 1995, thanks to the work of countless community advocates, volunteers, donors, willing landowners, and partners like the City of Port Townsend, Jefferson County, and Washington State, more than 245 acres in the corridor have been protected. Today, we have an exciting opportunity to purchase up to 57 acres in the Quimper Wildlife Corridor from interested private landowners, and help facilitate a Trust Land Transfer of an additional 107 acres from the Washington State Department of Natural Resources to Jefferson County, at a combined estimated cost of $1.6 million.

Thanks to the efforts of local conservation entities like Jefferson Land Trust, there are abundant public lands in Jefferson County where anyone can go to learn, explore, unwind, and connect with nature. And there are also simple activities that anyone — kid or adult — can do to learn about the world around them and engage positively with the wilderness.

One technique Erik recommends to start with is to find a “sit spot.” A sit spot’s a place you return to weekly — a constant, comfortable place from which to simply sit and observe the changes in the natural world around you. “A sit spot is one of the most powerful ways to learn about what’s all around us,” he says.

Your sit spot should be in a natural area where you feel safe (and where you’re not trespassing.) It should also be close to where you live; otherwise, you’re less likely to visit it often. Sit at this spot regularly: every day, throughout the week or at least once week, for a period of at least ten minutes.

Art is another avenue toward understanding and connection. “Ask someone to draw or paint something and they’re going to observe that thing intensely,” he says. “By asking them to draw something, you’re asking them to look much more closely.”

“Poetry is also super simple with kids, ‘cause they’re brilliant in that way. You can just give them some framework, like, What do you touch? What do you smell? What do you hear? You know, those kinds of things become poetry.”

And check out this map and field guide of the Quimper Wildlife Corridor to plan your next visit!