We’re delighted to announce that 45-acre Kodama Farm and Food Forest in Chimacum has been protected forever! For Kodama Farm, and our whole community, Jefferson Land Trust’s purchase of a conservation easement, represents the first step in a project that will help salmon, beavers, and other local wildlife thrive in the Chimacum watershed and support local food production. 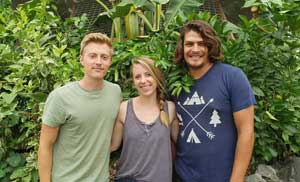 Sarah Spaeth, Director of Conservation and Strategic Partnerships for the Land Trust, has been working with three young farmers and The North Olympic Salmon Coalition (NOSC) to protect Kodama Farm since 2017. Thrilled that the farm is now protected, Sarah credits the collaboration with NOSC for making it possible. “This project may be the best example yet of our important partnership with NOSC. Because of it, Kodama Farm will soon be a place that showcases how conservation, restoration, and productive farmland can work in concert and benefit people and wildlife.”

Kodama Farm sits in the heart of Beaver Valley and is a model of regenerative farming. Kodama’s farmer-owners, Matt Montoya and siblings Grace and Ben Thompson, utilize organic, permaculture-based techniques to provide fresh food for our local community. After visiting inspiring farms and researching regenerative practices, the three chose farming as their shared vocation and began searching for land on which to start their farm. In 2016, they began leasing the land Kodama sits on. Later, with the knowledge that this conservation easement would eventually make it affordable and allow them to expand the farm’s infrastructure, Ben, Grace, and Matt made the leap to purchase the land. 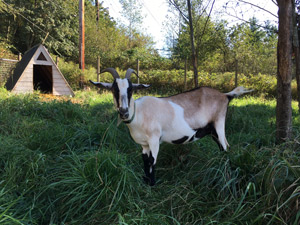 Kodama Farm is also ripe with innovation. Visible from Beaver Valley Road, the geodesic dome greenhouse is heated passively by thermal mass and a solar powered “climate battery,” allowing them to grow tropical and subtropical plants not typically found on the Olympic Peninsula. Lemon, lime, kumquat, blood orange, starfruit, dragonfruit, guava, and banana as well as a wide variety of peppers, and herbs are all produced in this greenhouse year round. 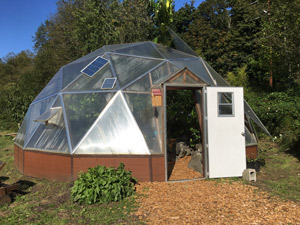 The geodesic dome greenhouse allows Kodama’s farmers to grow many tropical and subtropical plants not typically found on the Olympic Peninsula.

The Kodama farmers are also converting a 5-acre orchard into a food forest. A food forest emulates the layers, diversity, and nutrient recycling of a natural forest.

Kodama’s young farmers have a strong vision and enthusiasm for the future of both farming and conservation in Chimacum. They wish to create a biodiverse home for the plants, animals, and people of our community. To help bring that vision to life, Ben, Grace, and Matt have set aside 21 acres (almost half of their farmland) for salmon and habitat restoration. 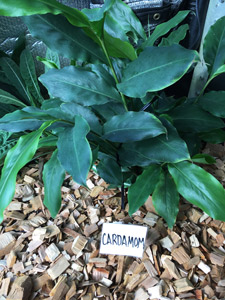 Cardamom is just one of the herbs produced in the Kodama greenhouse year round.

NOSC, Washington State University, and the Jefferson County Conservation District were key partners on this project. As part of a larger Chimacum Watershed grant, NOSC secured the funds needed for the easement from the Washington Department of Ecology’s and the Environmental Protection Agency’s National Estuary Program.

The grant funded the development of a restoration and protection plan for Chimacum Valley and also allowed conservation easements, like this one on Kodama Farm, to be purchased to compensate local farmers for setting aside land for habitat protection.

Sarah Doyle, Program and Partnership Manager of NOSC, sees this project as a perfect blending of restoration and agriculture. “At Kodama, we’re working to strike a balance between restoring wetlands and improving salmon habitat, while also enhancing productive farmland. It’s a great project.”

NOSC has worked closely with Ben, Grace, and Matt on the plans for restoring 21 acres of salmon rearing habitat along Chimacum Creek. According to Sarah Doyle, “The amount of thought and consideration that’s gone into the planning has been exciting. And this effort will end up having the best outcome for salmon and will also ensure that the farmers’ vision for their property is realized.” 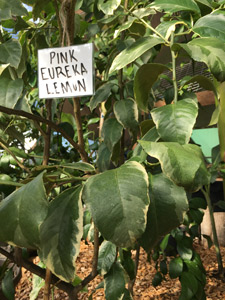 During the restoration phase of the project, the creek will be re-meandered through the property so that it follows a more natural path, creating improved rearing habitat for Puget Sound Coho salmon. Additionally, to improve water quality, thousands of native plants will soon be planted with the assistance of volunteers and a Washington Conservation Corps crew. Eventually, with help from the Land Trust and NOSC, the Kodama farmers plan to install trails that wind through the conservation site for the public to enjoy.

Ben, Grace, and Matt are excited that Kodama will serve as a prime example of the cooperation between salmon habitat restoration and regenerative agriculture. They hope that by increasing biodiversity and improving the health of the land and waterways, their farm “can work with the patterns of nature to produce food for our community.”

We all look forward to watching Kodama Farm develop as these young farmers restore and continue to enhance this special place.

“Through this partnership with Jefferson Land Trust and North Olympic Salmon Coalition, our goal is to provide an example of the cooperation between salmon habitat restoration and regenerative agriculture. By increasing biodiversity and improving the health of the land and waterways, our farm can work with the patterns of nature to produce food for our community.”