Ernest and Marilyn Karlstrom: A Legacy of Service, Generosity, and Passion for the Natural World 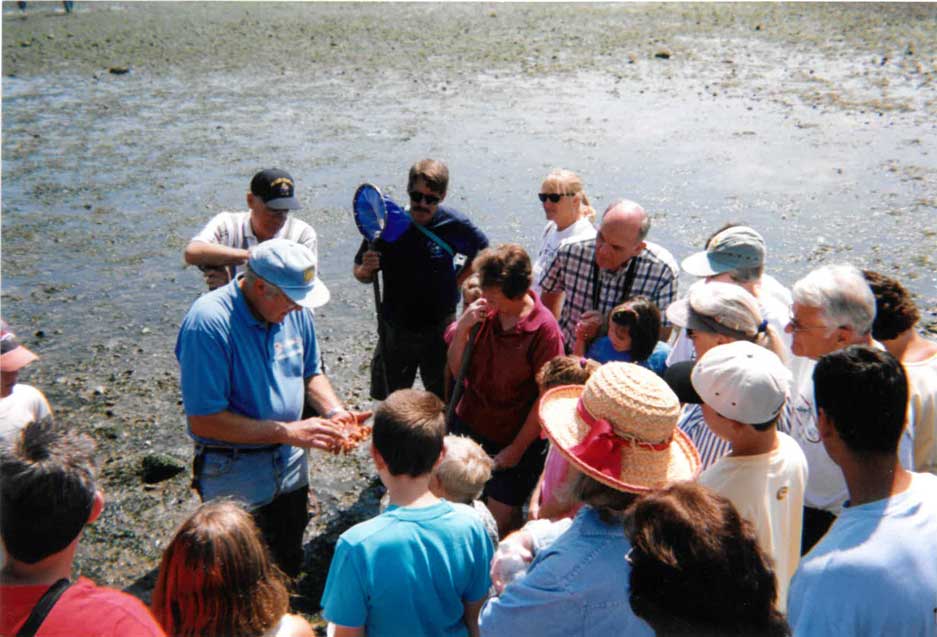 Ernie, seen here in a blue hat, was sharing his passion for the natural world by leading a beach tour on Fox Island.

On a lovely Autumn morning in Port Townsend, Kris Karlstrom dropped by the uptown office of Jefferson Land Trust. His nonchalance concealed a serious purpose. “I had never met anyone from the Land Trust; they didn’t know me,” recalls Kris. “I had been researching all the great sites around here that the Land Trust protects. With my wife’s whole-hearted approval, I walked in and gave them $200,000.”

Kris and his sisters, Lisa and Kim, were seeking a way to honor the memory of their parents, Ernest and Marilyn Karlstrom. Their parents’ love for wild places and connection to the Olympic Peninsula, resulted in a generous legacy gift to the Land Trust, establishing the Marilyn and Ernest Karlstrom Fund.

When Kris retired recently and decided to settle in Port Townsend, he heard about the Land Trust on KPTZ, another Jefferson County institution he admires, and also through his sister, Lisa Cartwright, who lives locally. Intrigued, he began to visit and research many of the Land Trust properties to familiarize himself with the land protected by the organization. He was inspired by the Land Trust’s work and motivated to help. Having recently inherited a portion of his parents’ estate, Kris saw an opportunity to honor their memories by passing it along as a gift to the Land Trust. 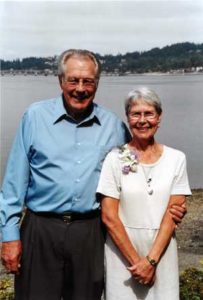 A love for nature was instilled in the Karlstrom family from the beginning. Ernest (Ernie) and Marilyn Karlstrom loved the natural world and passed this passion down to their three children. The Karlstroms were avid outdoor explorers. With their children in tow, they made many summer trips to the mountains and shores of Puget Sound and beyond. In 1958, they set out across the country, from Rock Island, Illinois to Valdez, Alaska.

Traveling in a VW microbus, the family camped the whole way, so Ernie could “mess with critters all summer,” recalls Kris. “My dad had summer jobs in the national parks as a ranger naturalist. He would give campfire talks about animals.” The young family spent their summers in wild places beginning when Kris was two years old. “My mom loved camping. My dad loved to fish. He just lit up when he was in the great outdoors.”

Generosity and service were core values of Ernie’s from childhood. He grew up on the shores of Fauntleroy in West Seattle in the original family home built by his parents. Ernie’s father, a minister and social worker, founded the Lutheran Compass Mission (now Compass Housing Alliance) to serve the homeless population of Seattle. Ernie always said it was a whole family operation in his youth. He later found his calling through teaching. 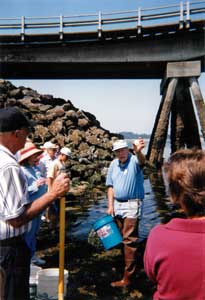 Ernie sharing his knowledge on beach tour near the Fox Island Bridge.

A 30-year career as a biology professor at University of Puget Sound allowed him to share his passion for the natural world with many students. His speciality was Herpetology. According to Kris, Ernie was the world’s expert on a rare toad in Yosemite, and was happiest in the field. Kris remembers, he “could really light up a beach walk. No creature escaped his scrutiny… I was also lucky to accompany him on field trips with his college students. Here I was, this little kid chasing frogs across Puget Sound.”

Marilyn Karlstrom, known as Chuckie to her close friends, was a descendant of sodbusters and writers. She grew up amongst the vast farmlands of Kansas. Her father, a journalist, was the editor of the John Deere company magazine. Her family’s original farm outside of Republic, Kansas remains in operation with Marilyn’s relatives still at the helm. Marilyn followed Ernie out West. “She was an adventurous sort,” recalls Kris. The written word was her passion.

An avid reader, she became a librarian with Tacoma Public Schools. Marilyn loved her time at Lowell Elementary, where the top floor panoramic view of Puget Sound fed her love for the land and waters of our region. Though of modest means, philanthropy and charitable giving were deeply important to Marilyn. Kris recalls Marilyn would write numerous donation checks every year to support the causes that were important to her.

Fifty-five years ago, Ernie and his brothers purchased 27 acres of forestland in Clallam County. He was excited to have land to nurture and explore, as well as a place to spend time in nature with his family. Kris remembers that the property had been logged twice and the trees weren’t very big. Under the Karlstrom family’s stewardship, the trees have grown tall and the land has remained in its natural state. “My dad wanted to do everything to conserve that land. He didn’t want it to ever be developed.” The land remains in the family, who steward it privately.

Remembering his father’s commitment to land stewardship, Kris says, “My dad would be so proud that we did this — mom too. Our parents were very civic-minded and generous people. They would be thrilled to know that their estate became a gift to future generations, preserving land for the next to come. We’re thankful to Jefferson Land Trust for being such an important community resource, and we’re grateful for the opportunity to honor our folks in this way.” 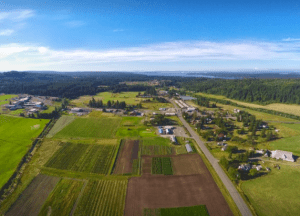 The Land Trust has protected a number of family farms in Chimacum, something that inspired this generous gift.

Reflecting on the importance of the work being done by the Land Trust, Kris states, “I believe in this. I come from The Pugetropolis, where urbanization and suburbanization have replaced open space, and once open space is gone, you can’t get it back. What I love about Jefferson County is that it’s rural, there’s still open space, and it seems to be committed to remaining that way.” Kris is particularly excited about the work in Chimacum Valley. “Before I moved here, I had no idea about Chimacum Valley. The preservation of farmlands is a whole other level of conservation. I was just thinking of salmon, streams, and estuaries. I wasn’t thinking about farmland. It’s very special out there, especially with the ridge protected above it now for watershed health.”

When considering how best to honor his parents, Kris chose to make his donation to the Land Trust an unrestricted gift. Unrestricted gifts give organizations the funding they need to support and fuel all the unseen work that goes into protecting land. “I wanted this gift to go where it was most needed,” Kris explained.

“We were stunned by this extraordinary gift that came out of the blue, and especially grateful for it this year — it made it possible for us to forge ahead with confidence on multiple fronts even in these turbulent times,” says Executive Director Richard Tucker. “We feel so fortunate to work with community members like Kris and his family who are committed to giving back to the land and community that sustains them.”

Kris and his sisters also reached out to close friends and family explaining the donation he was about to make and asking for supporters to join the fund. Several people contributed, and the fund in honor of Marilyn and Ernie continues to grow.

Jefferson Land Trust is very grateful to the Karlstrom family and friends for establishing and contributing to the Marilyn and Ernest Karlstrom Fund, and to the many community members who have remembered the Land Trust in their estate planning.

If you’re inspired to include Jefferson Land Trust in your own estate plans, please contact Director of Philanthropy, Kate Godman at kgodman@saveland.org to begin a conversation. Your gift will help ensure the forests, farms, and wildlife habitat that make our region unique are protected forever, for all of us and for generations to come. Thank you!

If you have questions about estate planning or suspect your current plan may need a tune-up, please save the date of January 13, 12-1 pm for an online seminar with estate planning attorney Alexandra (Xan) Gerson of Metis Estate Planning. Xan will review the basics of estate planning documents, estate taxes, when to update your plan, and explain new opportunities under the SECURE Act. More information coming soon.