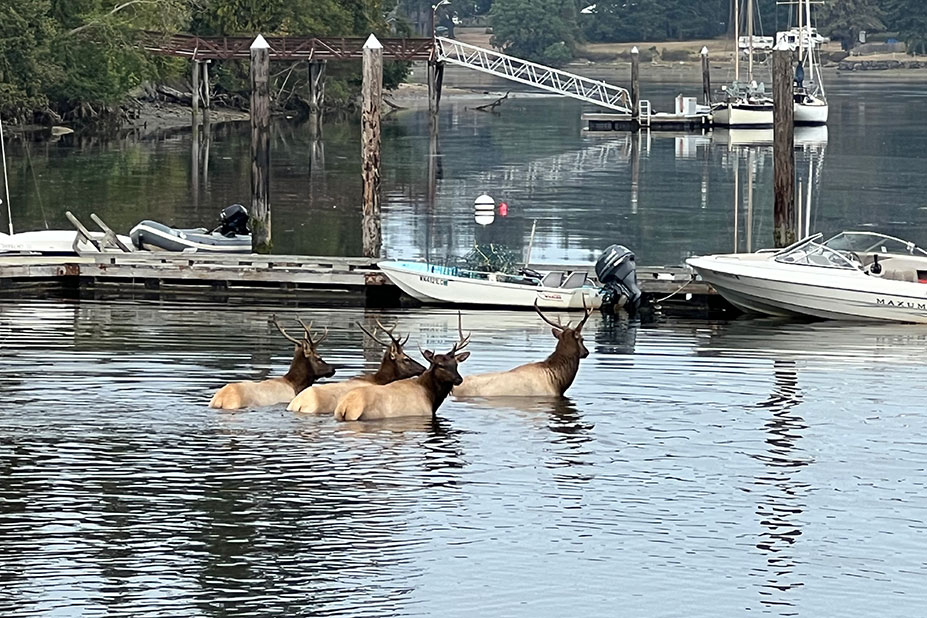 Over the last few months, residents of Jefferson County have been excited by rumors, photos, and glimpses of a rare sight: a herd of four young bull elk moving across the region. They’ve been spotted from Chimacum to Marrowstone Island, where Gary Rowe caught some very cool photographs (including the one above) of the elk swimming and wading in Mystery Bay. 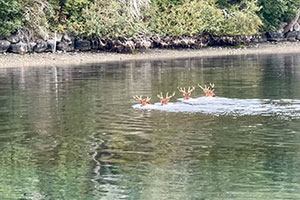 Another shot of the elk swimming in Mystery Bay. Photo by Gary Rowe.

According to Dylan Bergman, wildlife biologist and Point No Point Treaty Council Wildlife Program Director, this is what is commonly called a “bachelor herd,” and the bulls are called “bachelor bulls.” They’re reaching, or have recently reached, sexual maturity and have left their family group and home range but have not formed a new herd, or family group.

Elk are rutting right now (in mating season), so it’s likely these bulls are out looking for cows (female elk). They want to find cows who are not already in a harem and protected by a much larger male, who will fight them off, and they’ll likely keep moving until rutting season concludes, usually around the beginning of October. 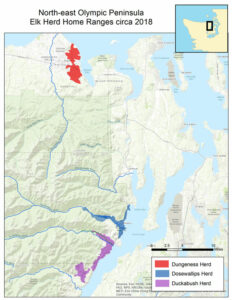 But these young elk, Dylan says, “are not likely to find cows nearby because the closest herds containing cows are south on the Dosewallips River and northwest in Sequim, on the Dungeness River.”

Dylan works primarily with elk on the Dosewallips River and the Duckabush River. The Point No Point Treaty Council’s wildlife research program runs herd counts two to four times a year to count the bulls, cows, and calves, monitoring what the populations are doing and watching for major increases or declines. They share this data with the state. They also keep a number of GPS collars on the elk, which allow them to determine if the herds are interacting with each other, where their home ranges are, and their habitat use within their home range.

“I’m guessing these four elk are or were part of a small herd of mostly or exclusively bull elk that live in the Dabob Road/Tarboo Creek area, and are seen there on occasion,” Dylan says. “I don’t know much about this herd because they’re very elusive, and I’m not sure what would cause these bulls to leave that area, but maybe a lack of cow elk (aka: sexual frustration). I have not even a guess as to why they would swim over to Marrowstone Island, except that the desire to look for cows is strong.” 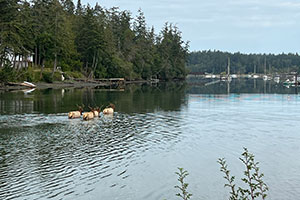 Another shot of the elk in Mystery Bay. Photo by Gary Rowe.

Elk antlers fall off in the late winter and grow back each year, generally getting larger over time. On the Olympic Peninsula today, elks’ only predators are mountain lions, though it’s uncommon for mountain lions to kill mature elk. A greater risk to elk in Washington state is Treponeme-associated hoof disease, or “elk hoof rot.” Only a single case has been documented in our local herds — a bull elk in the Dungeness River herd harvested during the 2019-2020 hunting season. Harvest of our local elk populations is minimal and closely regulated because the populations are so small.

Many thanks to Dylan for all the fascinating facts about elk and to Gary for sharing his pics. If you happen to run into this herd when you’re out and about, we’d love to see your photos — please send to lschneider[at]saveland.org. 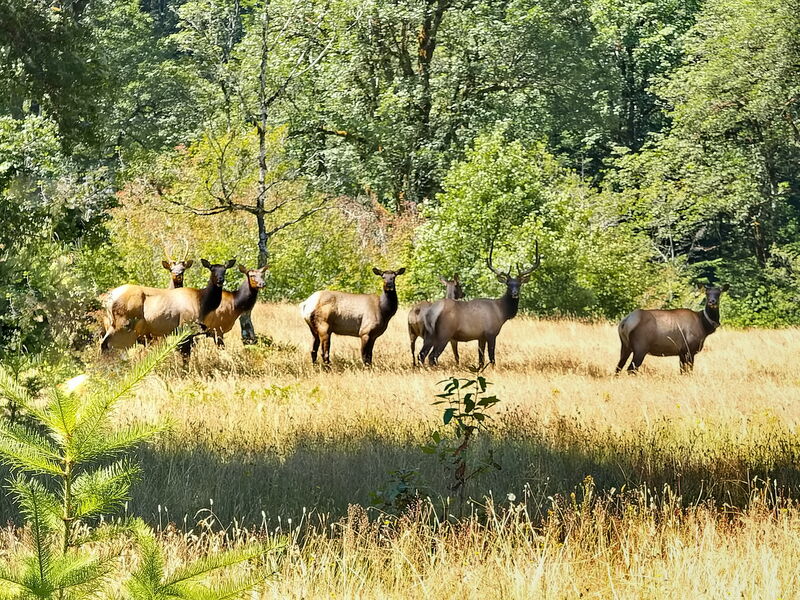 A different herd of elk on a Land Trust-protected private property near the Duckabush River; note the collar on the elk on the far right. Photo by Tim Lawson.