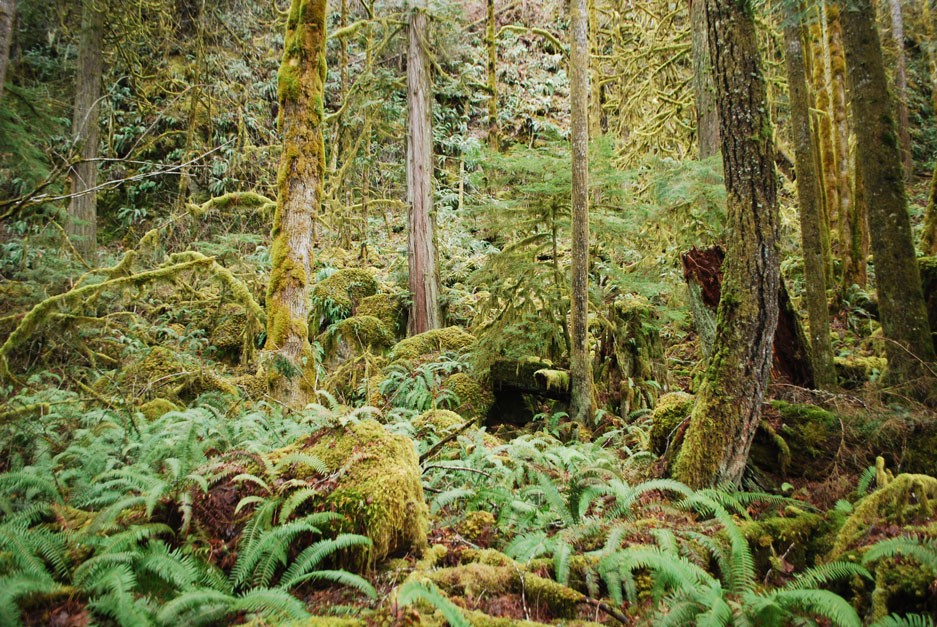 Protected in late 2015 by the Land Trust in partnership with Trust for Public Land, the Duckabush Riparian Forest Preserve includes 140 acres of vibrant, forested wildlife habitat along the Duckabush River. Unbeknownst to anyone, a portion of the property had been used to dump a substantial amount of trash over several decades.

Fortunately, some of our volunteer Preserve Stewards who regularly monitor and care for the preserve noticed the first of two large dump sites during a winter 2017 visit to the preserve. The lack of leaves made it possible for them to see what looked to be numerous household appliances at the bottom of a steep forested ravine.

Our awesome volunteers reported the issue, began to investigate, and realized they’d only seen the tip of the iceberg. Together with Land Trust staff, the stewards led a series of “Winter Stewardship” work parties that uncovered two buried trash sites. 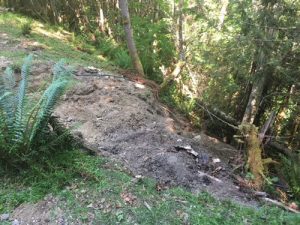 View of the steep, forested ravine where one of the dump sites was located.

We believe the first dumpsite noticed by our volunteers was created by someone discarding waste from a home remodeling project. Found were a number of appliances, including a washer, dryer, and refrigerator; roofing materials and carpeting; and bathroom fixtures (a toilet, sink, and bathtub).

As they could during 2017, our Preserve Stewards and their friends and family began to remove bags of trash from the property. Together, we then created a plan for a larger removal in 2018. In the first phase, volunteers came together during several work parties and removed what they could. In the second phase, we hired a Washington Conservation Corps (WCC) crew to work for three days to take care of the large appliances and begin making inroads on the buried trash. 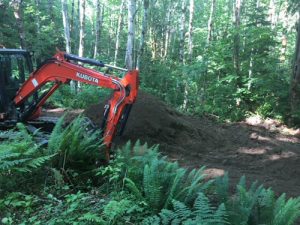 During the work of our volunteers and the WCC crew, we discovered that not only was there a LOT of trash, but that a great deal of it was buried at the two separate, steeply sloped sites. Because of this, for the final removal phase, we hired a contractor with a dump truck and excavator. Working onsite for five days, they dug up and removed the buried car parts and larger home remodel items and then restored the contours of the slopes.

As a final step, our summer interns conducted a final and very thorough search of the property looking for any remaining items. They dug test holes across a wide swath of the Preserve (just to be sure), pulled out a few last small items, and helped us officially sign this project off as “Complete.”

Thanks to everyone for the heroic effort and the fantastic result!