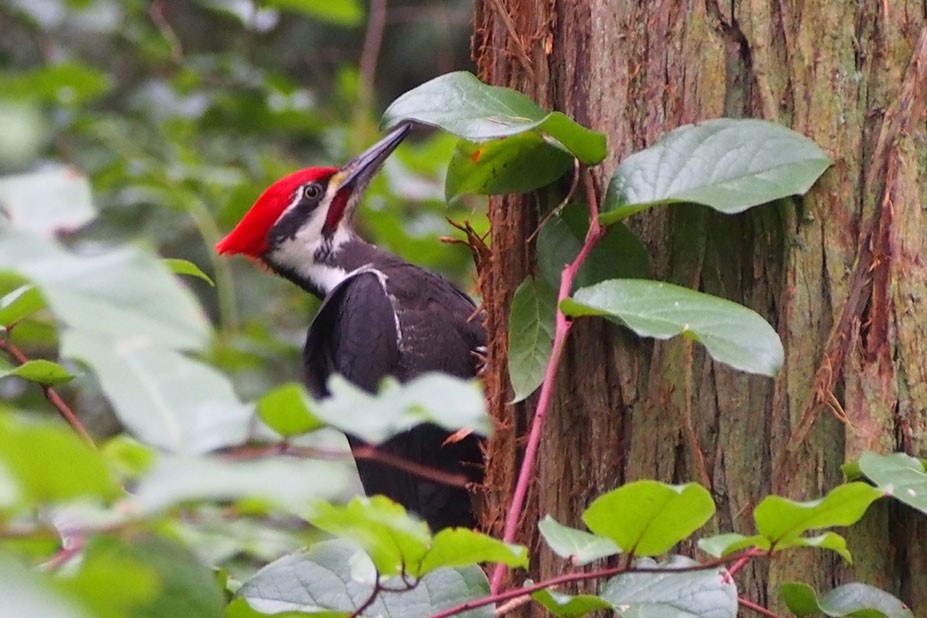 A recent study showed that nearly every bird species living in Washington’s forests and coastal areas is in decline, with particularly troubling declines in forest birds. Forest bird populations rely on a variety of coarse woody debris for shelter and sustenance including downed logs, standing dead trees, known as “snags,” and the large and/or old trees that provide perching and nesting sites. 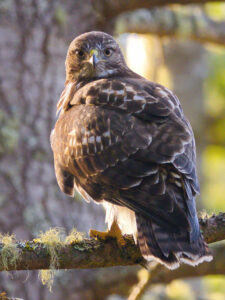 During assessments in 2018-19, we discovered that many of our forested preserves lacked these key features. Without human intervention, such snags, perches, and coarse woody debris can take hundreds of years to develop naturally.

That’s why, in 2020, we created the Taking Wing program, which takes critical actions on our permanently protected Land Trust forestlands to serve birds and other wildlife and position them for long-term success.

“Because the land management history in our region includes clearing out downed material for timber, firewood, or development, many of our forests are missing the downed wood that birds need to survive and thrive,” says Carrie Clendaniel, Preserve Manager at Jefferson Land Trust. “The Taking Wing program allows us to rebuild structural diversity within our forests, and increase the availability of key habitats for wildlife.”

The Taking Wing program is centered around four important projects: creating downed logs and downed log surrogates, creating standing snags, installing nest boxes, and creating hawk perches. These key features provide perching, nesting, and foraging habitat for birds that have been identified as “Priority Species” by the Washington Department of Fish and Wildlife and/or identified as particularly vulnerable to climate change impacts in the 2020 Audubon Survival by Degrees report. 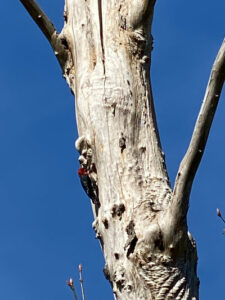 Red-breasted Sapsucker in a standing snag.

Thanks to grants from the Burning Foundation, funding from the Horizons Foundation, Jeffris Wood Fund, the Tulalip Tribes Charitable Contributions Fund and individual donors, and with the critical help of dedicated volunteers, we began to pilot some of these projects last year as part of our wildlife restoration activities at Duckabush Riparian Forest Preserve, Snow Creek Forest Preserve, Chai-yahk-wh Preserve, and the Quimper Wildlife Corridor.

In a healthy forest, downed woody debris on the forest floor serves a variety of smaller birds by creating an environment for the insects they eat. Downed logs act as sponges, soaking up water during seasonal wet periods and releasing it during dry periods. Downed log surrogates (which typically consist of at least three small-diameter logs piled together strategically) mimic natural downed logs, providing nooks and crannies in which small birds and other wildlife can forage, nest, and shelter. 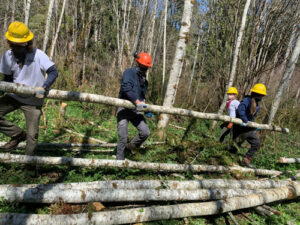 “We’re already finding more amphibians around the downed log surrogates compared to the areas that don’t have them,” Carrie says. “Creating these surrogates also has the double benefit of thinning out dense forests so that the remaining trees have more resources, like light and water, to help them grow.”

We’ve also started to create standing snags to provide bird habitat. Standing snags are trees which are dead, but still standing, providing birds a place to perch, to forage, and to shelter within. Guided by scientific studies, and with the help of an expert tree feller, care will be taken to select a mix of tree types and heights for snags across our preserves to ensure they’ll serve the greatest variety and number of birds while keeping overall forest health in mind. 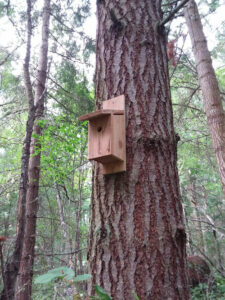 Volunteers built and installed nest boxes in the Quimper Wildlife Corridor in summer 2021.

Last summer, using plans provided by a wildlife biologist, dedicated Land Trust volunteers built and installed six nest boxes in two varieties — one for small songbirds and one for larger birds — in the Quimper Wildlife Corridor, where volunteers have been monitoring them for nesting activity. This coming year, we also plan to place two hawk perches in locations along lower Donovan Creek that lack trees tall enough for hawks, eagles, and owls to perch in.

As we implement these four projects across our preserves, we continue to rely on our incredible volunteers to monitor the habitat to measure success. These findings will inform future work on our other preserves, and we hope to share what we’ve learned with community members and conservation partners so that they can take similar measures on other private and public lands in Jefferson County. Birders and bird-lovers will also have the opportunity to engage with the Taking Wing program as community scientists, observing and reporting bird activity on our preserves.

“Birds perform several significant roles in our ecosystem,” Carrie explains. “Predatory hawks and raptors help keep vole populations down, and other birds keep insect populations in check. They also help move seeds around the forest.” Some birds also create cavities in standing snags in which many other animals make their homes. 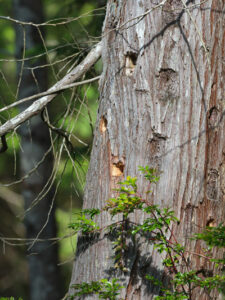 Birds create cavities in trees, like this one on Chimacum Ridge, where other animals make their homes. Photo by Tim Lawson.

Recently, in December 2021, the Burning Foundation redoubled their support of Jefferson Land Trust’s wildlife habitat restoration activities with a $15,000 grant for the Taking Wing program. We’re thankful for this ongoing support, which will allow us to continue to advance these critical projects into 2022 and beyond.

Taking Wing’s targeted restoration benefits birds now, and also helps build a future in which Jefferson County’s forested preserves are home to a rich variety of wildlife — forever. We’re grateful to the Burning Foundation, our dedicated volunteers, the Chimacum Riparian Restoration crew, and all the Land Trust supporters who make this work possible. We look forward to celebrating more milestones as this exciting program takes flight.