Reflections of a Preserve Steward 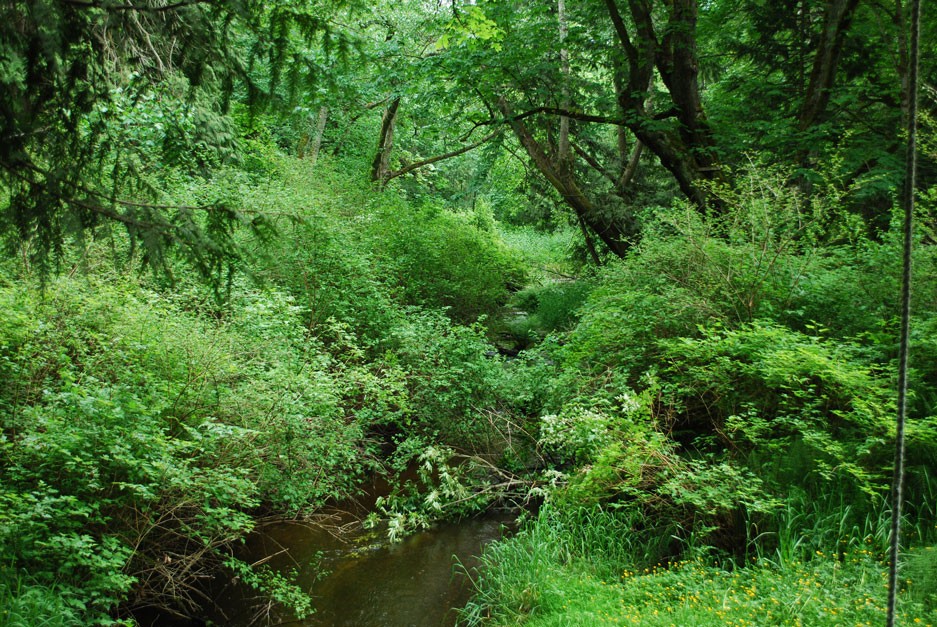 Chimacum Creek runs through the S-Curve Preserve, which is located in a densely populated section of Irondale.

When I heard the Land Trust Alliance’s Executive Vice President Wendy Jackson speak at our Conservation Breakfast last year, I was struck by the point she raised at the end of her presentation. She said that Land Trusts know how to deal with preserving land, but how to deal with neighbors when managing the land — that’s a work in progress.

Having just become a volunteer Preserve Steward at the S-Curve Preserve on Lower Chimacum Creek the month prior, I recognized this as a crucial issue for me to explore.

S-Curve Preserve is located in a densely populated section of Irondale. Neighbors used the land in various ways long before it became a Land Trust preserve about 10 years ago. 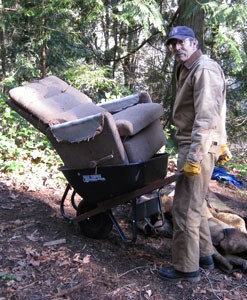 Volunteer removes a recliner during a clean-up at S-Curve Preserve.

The stewards who came before me, and these include Erik, Carrie, Owen, and others have had to deal with issues such as rope swings, bicycle tracks and jumps, camping sites, structures, garbage dumping, fires, tree cutting, human caused erosion, and plant destruction.

There had been a sense of ownership of this property by a number of neighbors in ways that were clearly incompatible with the purpose of a Preserve.

My first monitoring experience showed me that I would need to involve myself with neighbor relations as a central part of my job. When Carrie first showed me the Preserve, we noticed that some trees had been cut for firewood. When I returned for my monitoring, I saw that some of that cut up wood had now been removed, and that there was a wheelbarrow track leading to a neighbor’s house.

After screwing up my courage, I decided to investigate further. I went to the home and introduced myself by name and as the Jefferson Land Trust’s volunteer Preserve Steward.

I explained what I had noticed and that it was necessary to leave all downed wood in place and to not cut trees in order to respect the ecology of a Preserve. 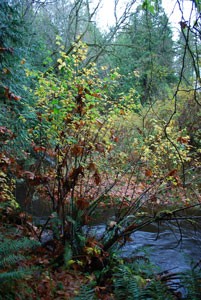 The S-Curve Preserve is enjoyed by visitors, many of whom live nearby.

Although at first hesitant, the fellow introduced himself, first as Donny and then later with his full name. He was worried that he was “in trouble.” I quickly assured him that he wasn’t, but that there are certain limitations on the use of a Preserve that needed to be followed.

Donny got it, and he then led me on a whirlwind tour of some of the S-Curve to show me what he does to maintain the trails so that they are passable. Clearly he loves the place and wants to respect it, so we talked further about what can and can’t be done there.

He volunteered to help other neighbors “know the rules.” He then gave me his contact information. I may be the Preserve Steward, but it quickly became evident that Donny is the Preserve Protector!

For example, shortly after some kids rode a 4-wheeler down the main path of the Preserve, I mentioned it to Donny. He spoke with them and their parents. It has never happened since.

Garbage dumping is often a problem in a Preserve, but there was only a little that I found there. However, just outside the Preserve at the 8th Avenue entrance there was a great deal.

I decided that I would invite Donny and another neighbor who I had met, named Ruby Mohn, to join me in a cleanup day. Ruby has lived next door to the Preserve at the 9th Avenue and Arden Street entrance for 18 years, and she walks her three dogs there multiple times daily.

Donny was unable to join us, so Ruby and I spent one Saturday morning filling my truck bed with the debris. A month or so later I met Jack, the fellow who lives in the house adjacent to the 8th Avenue entrance.

He thanked me for cleaning it up and explained that a previous house member had thrown the debris there a year before. Jack said that he also regularly walks in the Preserve.

I was developing a regular pattern of introducing myself to any immediate neighbor and getting their name and of also saying hello to any other person who was heading toward or walking in the Preserve.

Later when I was digging up blackberries and holly there, I saw two teenage boys entering the Preserve. One was on a bicycle and the other was walking next to him. They were having a conversation. When they reached where I was on the path, I said hello and introduced myself. I told the one on the bike that riding bicycles wasn’t allowed there.

He expressed surprise. He thought only motorized vehicles were not allowed. (After our conversation I looked at the old sign at the entrance, and indeed it did not mention bicycles. He — Caleb was his name — had read the sign!) He apologized and said he would walk his bike after that. 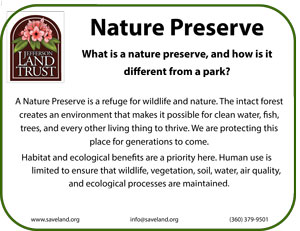 Thanks to Caleb’s question, a sign like this was added to S-Curve Preserve and other Land Trust Preserves.

During our conversation, Caleb said he thought of the Preserve as a park and asked the difference between them. I explained and said we’d put a sign up stating the difference. Carrie and I worked on creating a sign to do just that, and it is now up in the S-Curve and I’ve seen it at Illahee Preserve as well.

Thank you Caleb for your question!

Besides a regularly scheduled Land Trust work party during which we pulled out lots of ivy from near the creek, the big event was a neighborhood trail making Saturday in September.

In preparation, Carrie, Savannah (a summer intern), and I decided which of the many pathways throughout the Preserve needed to be decommissioned and blocked and which few should be improved and marked by signs.

Unfortunately, many steep areas that lead down from the upper trail to Chimacum Creek had become informal paths that resulted in erosion of the hillside. Carrie and Savannah made signs to post at the worst sites, and, with the guidance of Jim Shaver of the Quimper Trails Association, we scoped out the best place to make a trail down to the creek.

Then Savannah used a weed-eater to roughly clear it in preparation for the Saturday workday. Letters of announcement and invitation had been sent to all of the households around the Preserve.

On that Saturday the neighbors who I had actually met in person joined Carrie, Savannah, Ruby (who had by now become my co-Steward), and me. There was Donny, Violet and Arrianna (ages seven and nine, sisters who live with their parents in the house where Donny lives), and Jack and the two children from his house, the youngest being three years old.

The Land Trust provided refreshments and water, and Jack arrived with a box of donuts provided by his partner, Samantha. After eating all the donuts and introducing ourselves around a circle, during which we all shared what we like about the Preserve and how we use it, we got to work.

As we worked on the trail that leads in and out toward 9th Avenue, Jack asked if we could reroute it slightly to make it less steep. He said that he tended to slip because of the way it went down the incline. We found a safer route and dug up and replanted a sword fern to block the old route.

It’s this kind of neighbor input and Land Trust response that helps make the Preserve belong to everyone. Together, we also discussed a problematic section of trail leading to Price Street that Carrie, Savannah, and I had reviewed with Jim Shaver. It is dangerously narrow and has a very steep embankment.

With the neighbors we talked about various options and received their input. We also took in their request for some benches, including one down at the creek. The workday went on longer than expected, and we completed all we had set out to do. It was both fun and a great success! 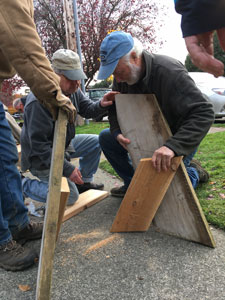 Volunteers building benches to be installed at Land Trust preserves.

A month or so later Carrie invited me to participate in the Land Trust’s bench building event. I had found some boards that had been discarded in the Preserve and Carrie discovered that she had purchased a little more wood than she needed. From these we constructed a bench. And a week later bench builder and Board Member Michael Machette and I set it at the creek for the neighbors to sit on and enjoy the beauty.

That afternoon when I was leaving I met Jack who was heading into the Preserve. I told him that there was now a bench down at the creek. He asked if I had made it, and I told him, “Yes, me and three other people.” He looked at me and said, “I want to shake your hand!” which he did.

This was a very moving and inspiring experience for me because I recognized how much our partnership with the Preserve’s neighbors matters to them. Together we honor the natural world and each other.

There is still much to be done to involve the neighbors with the Preserve in ways that do honor and protect it. Some seem to have the attitude that the Land Trust is an intruder into their bailiwick. Signs have been torn down; I even found one posted on a tree in someone’s yard at the corner of Kinkaid Street and 9th Avenue.

Ruby and I have replaced the missing signs, and they tend to stay. However, the metal sign marking the adjacent Stroud Easement was removed and replaced with some creative garbage art! And there’s still some bicycle riding in the Preserve. 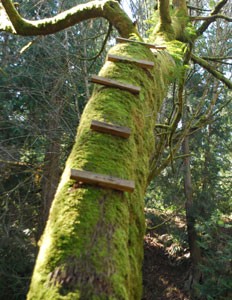 Rope swings have had to be removed on multiple occasions at S-Curve Preserve.

Erik has, on multiple occasions, had to cut down a rope swing. It had been hung from a tree over the steep embankment even after Donny Craig had warned two people who were considering doing this how dangerous it was. Ruby has had to remove human waste and toilet paper from the Preserve a couple of times.

I am hoping to enlist Ruby and Donny to bring together a few neighbors from the Price Street side of the Preserve so that we can all discuss their concerns and our basic ground rules. This would be good to do with some 9th Avenue neighbors as well. We need to meet and listen to each other.

This is all a work in progress. It always will be. There are more invasive species to remove. We have a couple more benches to make and place. We want to reroute the narrow trail above the very steep and eroding embankment and replant it with plants available on site. This will require further discussion with the neighbors and, hopefully, their assistance.

Ruby and I are planning to invite some 4th grade students from the Chimacum School District who live in that Irondale neighborhood for a tour of their Preserve. There are many more neighbors to meet and to engage — to find out their relationship with the S-Curve Preserve and their needs and to tell them our story.

Ruby and I believe it is essential to connect people with nature. The future of this planet requires the development of a respectful relationship between humanity and our natural world.

The S-Curve Preserve and its neighbors present a microcosm of both the conflict and the harmony present everywhere. Thus, we have an opportunity here in this Irondale neighborhood to help heal the rift that endangers our common future. Each of us in our small ways can do this.